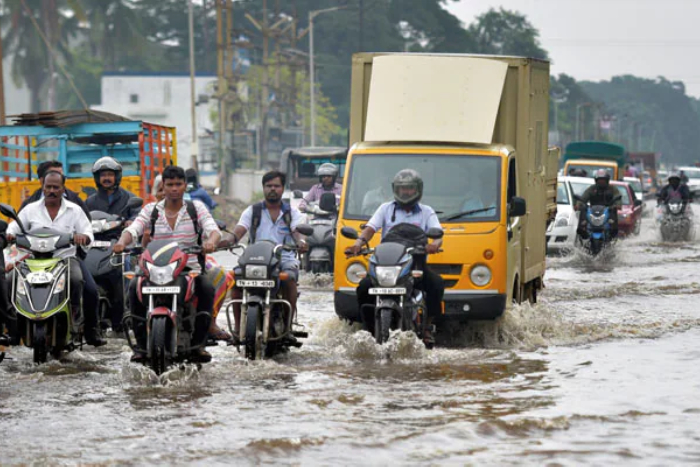 Tamil Nadu and capital Chennai have been battered by heavy rains over the past few days, having received 46 per cent excess rain so far this season, as compared to the historical average.

A ‘red alert’ – for heavy to very heavy rainfall today and tomorrow – has been issued for 20 districts across Tamil Nadu, including Chennai, after a well-marked low-pressure area over the Bay of Bengal intensified into a depression.

It is expected to move west-northwest and reach Tamil Nadu’s northern coast by tomorrow morning, leading to heavy to very rainfall over parts of the southern state as well as neighbouring Puducherry and Karaikal.

Ahead of the expected fresh deluge, the Tamil Nadu government has set up 434 ‘siren towers’ to alert authorities to floods and other emergencies, and is working with telecom networks to ensure mobile connectivity is not affected; 50 cellular phone towers (on wheels) are ready for use.

In Chennai 46 boats and as many JCBs, or earth movers, over 500 giant motor pumps have been deployed to aid in rescue efforts and to drain floodwaters, Greater Chennai Commissioner Gagandeep Singh Bedi told NDTV

169 relief centres are operational and floods from rainfall earlier this week have been cleared in 216 of around 400 areas. 14 of 16 flooded subways have also been cleared. Free food will be given at ‘Amma canteens’ and the Chennai Corporation will distribute food packets to communities in low-lying areas.

Concerns over additional floods after water is released from reservoirs near the city were allayed by Mr Bedi, who told NDTV the water will be released gradually and that there would be no sudden discharge, like 2015. Yesterday the Chennai civic body was pulled up by the Madras High Court, which asked it: “What have you been doing since 2015 floods?” and warned it may have to intercede.

Tamil Nadu has been battered by heavy rains over the past few days, having received 46 per cent excess rain so far, as compared to the historical average.

At least five people have died in rain-related incidents, over 530 houses or huts have been damaged and more than 1,700 people are in relief camps.

Chennai was pounded by rains over the weekend – the heaviest since the 2015 floods – leading to widespread flooding in the city and its suburbs of Chengalpattu, Kancheepuram and Tiruvallur.

There was some respite today, though, with the city receiving just 14.7 mm till 5.30 am.

Heavy rainfall, however, hit the districts of Nagapattinam in Tamil Nadu and Karaikal in Puducherry this morning; the former recorded 24.5 cm and the latter 27.2 cm as of 5.30 am.