You are here
Home > DAILY BAWAL > After Violence Over Prophet Remark Row, Bulldozers Out In Two UP Cities 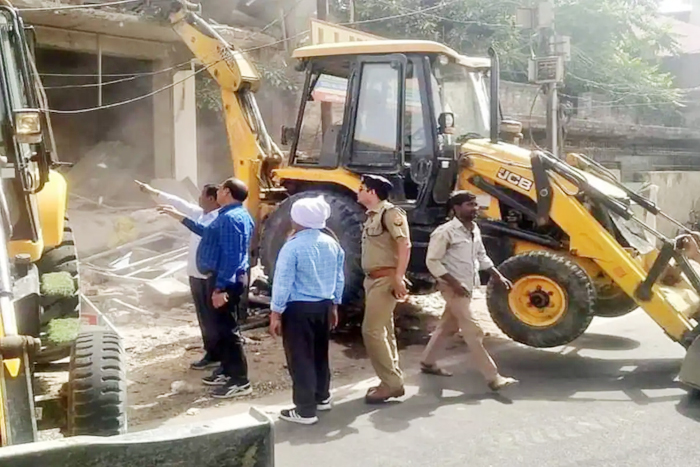 After Violence Over Prophet Remark Row, Bulldozers Out In Two UP Cities

Prophet Remark Row: Yogi Adityanath’s office said that officials have been given liberty and clear instructions to take stringent action against “anti-social elements”.

In Kanpur, where violent clashes and stone-pelting took place on June 3 over the same issue, the police today demolished properties belonging to a man they called a ‘land mafia linked to local leader Zafar Hayat Hashmi who is the main accused in the violence’.

Additional Commissioner of Police (Law and order) Anand Prakash Tiwari said that the Kanpur Development Authority (KDA) has demolished a newly-constructed building owned by one Mohammad Ishtiyaq, who is said to be a close relative of prime accused Zafar Hayat Hashmi.

The building was in the Swaroopnagar locality of Kanpur, 3 km away from where the violence happened.

“There are reasons to believe that the investment has been made by the prime accused of the violence case,” Mr Tiwari said, and claimed that the demolition was carried out in accordance with “norms and regulations.” A local court had on Friday approved 72 hours’ police remand of Mr Hashmi along with Jawed Ahmad Khan, Mohammad Rahil, and Sufiyan. “The accused were taken into police custody following the court’s order on Saturday morning and will remain in custody till Tuesday morning,” said Mr Tiwari.

Chief Minister Yogi Adityanath’s office has ordered the identification and immediate arrest of conspirators and accused. “Closely investigate the CCTV footage. Proceedings against such people should be initiated under sections of the National Security Act and Gangster Act as per law,” it tweeted.

Speaking to NDTV, UP Police’s additional director general (law and order) Prashant Kumar said the situation is under control in the state now and the police are taking strict action against those responsible for the violence.

The police will take strict action against all the people or groups who have “dared to disturb peace and harmony”, including charging them under the Gangster Act, seizing their properties, and ensuring they pay for damages caused to private and public property so that such incidents are not repeated, Mr Kumar has said.

Chief Minister Yogi Adityanath’s office said that officials have been given liberty and clear instructions to take stringent action against “anti-social elements”.