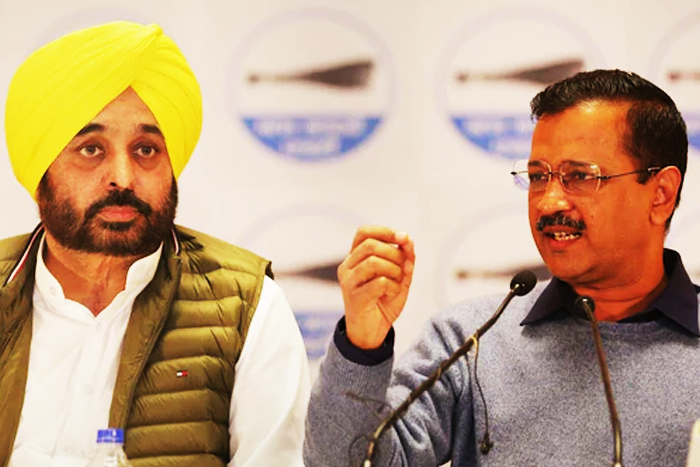 Around 3 per cent votes were in the name of Congress leader Navjot Singh Sidhu, Mr Kejriwal shared. Some even chose Mr Kejriwal, the Chief Minister of Delhi, but those votes were considered invalid.

“It is clear that AAP will win the Punjab election. In a way, the person chosen as the Chief Ministerial candidate will be the next Chief Minister of Punjab,” Mr Kejriwal said at an auditorium in Mohali.

The auditorium erupted in cheers and slogan shouting as a montage on Bhagwant Mann played out on a giant screen.

“People laughed when they see my face. But now they cry and say, save us,” Mr Mann, a standup comic, said.

Punjab will vote on February 20 and the results will be declared on March 10.

AAP is the first — so far the only — party to announce a chief ministerial candidate in Punjab. It had avoided doing so in the previous election and this time round, had held out until now.

Last week, AAP asked the people of Punjab to dial, WhatsApp or SMS on 7074870748 to name their choice for Chief Minister.

Mr Mann, AAP’s Punjab chief, had waited long for the party to name him as its presumptive chief minister.

Known for his oratory in Parliament, Mr Mann enjoys a wide support base among people and party leaders. He joined the AAP in 2014. He won the Lok Sabha election from Sangrur but lost in the 2017 Punjab polls to Akali Dal’s Sukhbir Singh Badal. In the 2019 Lok Sabha polls, he won again from Sangrur.

Reports had earlier suggested AAP was also in touch with Balbir Rajewal, a farm union leader, as a chief ministerial candidate.

Mr Kejriwal told reporters last week that he wanted Mr Mann for the top post but it was the MP who pushed for a public vote.

“Bhagwant Mann is very dear to me. He is my chhota bhai (younger brother). He is the biggest leader of AAP. I was also saying he should be the Chief Minister candidate. But then he said no…the people must decide,” said Mr Kejriwal.

AAP has emerged as a strong challenger to Punjab’s ruling Congress in the coming elections. The other lead players are the BJP-Amarinder Singh alliance and the Akali Dal-led grouping.

In the 2017 assembly election, the Congress party won 77 of the 117 constituencies of Punjab. AAP had emerged second, winning 20 seats. The Akali Dal had won 15 seats and its now separated alliance partner BJP had won three seats.