You are here
Home > DAILY BAWAL > 27 Dead, 40 Hospitalised In Massive Fire At 4-Storey Building In Delhi 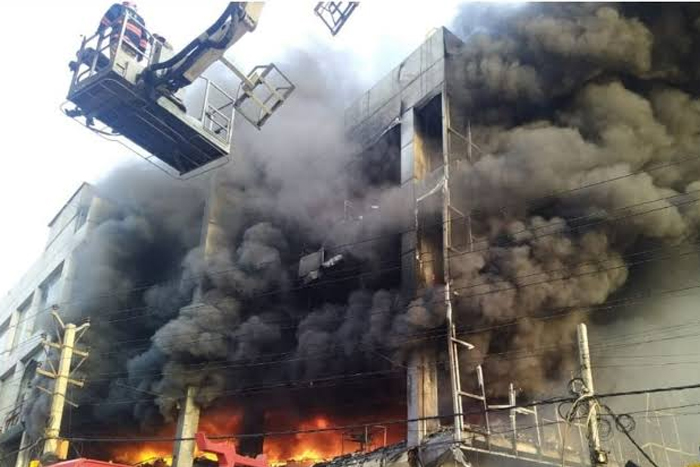 27 Dead, 40 Hospitalised In Massive Fire At 4-Storey Building In Delhi

At least 27 people were killed after a massive fire broke out in a commercial building near Mundka metro station in west Delhi on Friday evening.

A massive fire engulfed in a four-storey building in west Delhi Friday evening that has cost multiple lives. So far, 27 bodies have been recovered. The police are apprehensive that the number might go up. Officials said a whole floor of the building is yet to be searched. The fire has been doused and the focus is now on rescue work.

More than 40 people sustained burns and have been hospitalised. Around 60-70 people have been rescued from the building, the police said.

“This was a CCTV godown and office. We have been conducting searches since. People said many have been trapped inside,” said Sunil Chaudhary, the Deputy Chief Fire Officer of Delhi.

The commercial building — which mainly had office space — is located near Mundka metro station in west Delhi. According to fire department officials, information about the blaze was received at 4.40 pm, following which 20 fire tenders were rushed to the spot, reported news agency ANI.

The fire started from the first floor of the building, which houses the office of a CCTV camera and router manufacturing company, the Deputy Commissioner of Police (Outer) Sameer Sharma has said.

“Extremely saddened by the loss of lives due to a tragic fire in Delhi. My thoughts are with the bereaved families. I wish the injured a speedy recovery,” tweeted Prime Minister Narendra Modi.

Extremely saddened by the loss of lives due to a tragic fire in Delhi. My thoughts are with the bereaved families. I wish the injured a speedy recovery.

The Prime Minister has said that ₹ 2 lakh each will be given to the families of those who lost their lives. The injured will be given ₹ 50,000, his office tweeted.

Shocked and pained to know abt this tragic incident. I am constantly in touch wid officers. Our brave firemen are trying their best to control the fire and save lives. God bless all. https://t.co/qmL43Qbd88

“Distressed by the tragic fire accident at a building near Mundka Metro Station in Delhi. My condolences to the bereaved families. I wish for speedy recovery of the injured,” President Ram Nath Kovind’s office has tweeted.

“Pained by the tragic loss of lives in the Delhi fire near Mundka Metro station. Heartfelt condolences to the bereaved families and wishing the injured a speedy recovery,” tweeted Congress’s Rahul Gandhi, who is currently attending a three-day party “Chintan Shivir” in Rajasthan’s Udaipur.