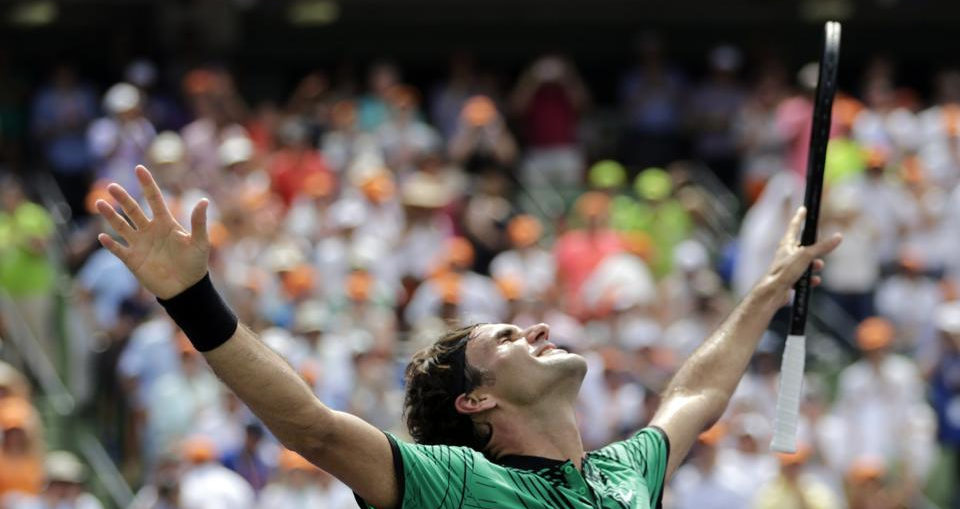 Roger Federer celebrates after defeating Rafael Nadal in the men’s singles final at the Miami Open on Sunday.(AP Photo)

Roger Federer defeated long-standing rival Rafael Nadal 6-3, 6-4 to win the Miami Open on Sunday and continue his outstanding start to the year.

Since returning from his six month injury lay-off, the 35-year-old Federer has also won the Australian Open and Indian Wells and he heads into the clay season as, once again, the dominant presence on the ATP Tour.

Federer has beaten Nadal in all of those events this year and has now won his last four meetings between the pair.

The Spaniard was playing in his fifth Miami final but remains without a win in the Masters series event.

The first set was a tight affair with both players having their opportunities to break but it was not until the eighth game and 10th break point of the set that one of them was able to get ahead.

Nadal could only find the net from a Federer backhand and the Swiss grabbed a 5-3 lead and he comfortably held the next game to secure the first set.

There has always been a marked contrast between Federer and Nadal’s differing styles and with time it has become further accentuated.

Nadal was working hard in the 83 degrees afternoon heat, thrusting himself into his shots while the elegant Federer’s poise appeared almost casual.

The second set took an almost identical path, albeit with fewer openings to break for both players until Federer again pounced, to grab a 5-4 lead when Nadal went long returning a fine backhand.

Ryan school murder: 16-year-old accused went back and forth on plot to kill