You are here
Home > DAILY BAWAL > Yamuna runs dry, water supply in capital to be hit from today 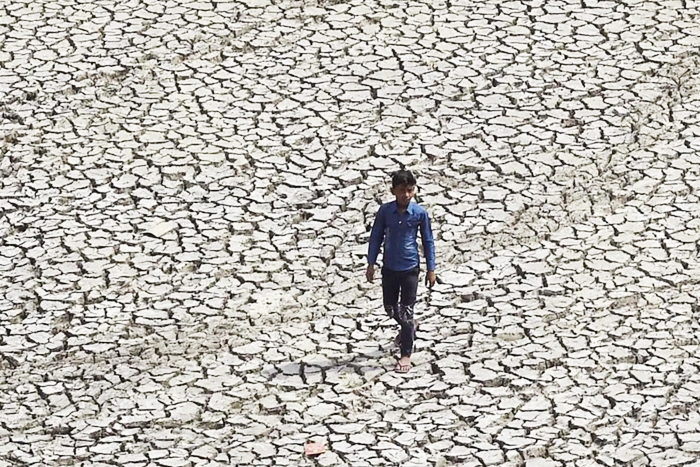 Yamuna runs dry, water supply in capital to be hit from today

A statement from the DJB stated that the water level at the Wazirabad pond had fallen to 669.40 ft, against a normal level of around 674.50 ft. The level at the pond has fallen further from 671.80 ft on May 12.

Water production at the Chandrawal, Wazirabad and Okhla water treatment plants (WTPs) had fallen by around 25% on Monday on account of depleting water levels in the Yamuna, according to the Delhi Jal Board (DJB).

A statement from the DJB stated that the water level at the Wazirabad pond had fallen to 669.40 ft, against a normal level of around 674.50 ft. The level at the pond has fallen further from 671.80 ft on May 12. The release of raw water from Haryana had also reduced, according to the statement. Water supply is likely to be affected from Tuesday morning onwards till the pond level improves.

The three WTPs together produce around 230 MGD (million gallons per day) — 90 MGD from Chandrawal, 120 MGD from Wazirabad and 20 MGD from Okhla — out of the total of around 921 MGD of water as of March 2021, according to the Economic Survey of Delhi.

“The quantity of water being released is less, both directly into the river and through the other sources. Demand is higher in the summer, and supply is now low with the river drying up,” the official added.

The DJB had written to the Haryana Irrigation Department on May 12, requesting an additional 150 cusecs of water to be released into the river. The Carrier Lined Channel (CLC) and Delhi Sub-Branch (DSB) bring water to Delhi from Haryana.

When the DJB wrote to the Haryana Irrigation Department on May 3, it had noted that the flow in the CLC was 563 cusecs against a required flow of 683 cusecs. “We should be getting 683 cusecs through the CLC and 330 cusecs through the DSB, which is a total of around 1,013 cusecs. But we are now getting only around 950 cusecs,” the official said.

The DJB has written to the Haryana Irrigation Department thrice from April 30 onwards. In response to the request for additional water, the DJB was informed that the city’s share of water is being released from Haryana, the official added.

A senior official of the Haryana Irrigation Department said that temporary fluctuations in the CLC and DSB could be likely, but the required supply is being maintained. “The fluctuation is only for a few minutes before it is restored. The issue is that demand has grown in Delhi, but the share decided by the Upper Yamuna River Board has remained the same. We don’t supply water directly through the river route now, we supply through the CLC and DSB,” he said.

In 1994, a memorandum of understanding was signed among the states of Delhi, Haryana, Uttar Pradesh, Rajasthan, and Himachal Pradesh on allocation of surface flow of the river to these states.

In addition to the CLC and DSB, the DJB depends on drawing 120 cusecs from the river itself, which it can no longer use, since the river is mostly dry, the official said.