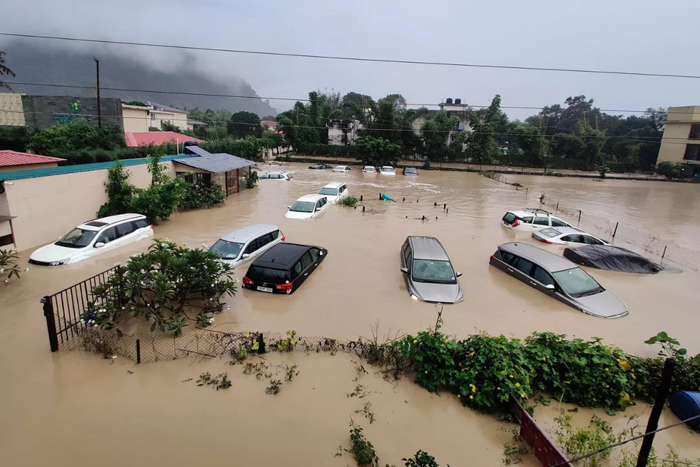 Chief minister Pushkar Singh Dhami on Tuesday undertook an aerial survey of the rain-hit areas in the state to assess the damages caused due to rain.

The death toll in rain-related incidents in Uttarakhand over the past two days has risen to 46. Uttarakhand has been witnessing heavy rains for the past two days, leading to chaos and disaster across the state. Over 300 people were rescued by the National Disaster Response Force (NDRF) from flood-affected areas of Uttarakhand. Union home minister Amit Shah will today visit the state to take stock of the situation and hold review meetings. He will also conduct an aerial survey in Uttarakhand on Thursday.

“The number of casualties in the Kumaon region alone has crossed 40,” DIG Nilesh Anand Bharne told PTI on Tuesday. Of 46 deaths, 28 were killed in Nanital, six in Almora, two each in Champawat and US Nagar, and one in Bageshwar during the last 24 hours. The remaining deaths took place on October 17 and 18 in the state, said officials.

Uttarakhand DGP Ashok Kumar said that water level has reduced in the Kumaon region, but routes have not been opened yet. “It will take time…Police, SDRF, NDRF teams are working on the relief operations; thousands of people have been evacuated,” he was quoted as saying by ANI.

Chief minister Pushkar Singh Dhami on Tuesday undertook an aerial survey of the rain-hit areas in the state to assess the damages caused due to rain. He later announced a compensation of ₹4 lakh each to the next of kin of those killed in rain-related incidents across the state over the last two days.

At least seven people have died since last night due to heavy rains and landslides in Almora, reported ANI. Four people died in Raapad village after a house was hit by a landslide last night, according to Uttarakhand PIB. However, it could not be confirmed if these deaths are already a part of the said death toll.

After witnessing incessant rain over the past two days, the state is likely to stay dry for the rest of the week, according to Indian Meteorological Department (IMD). The weather department said that a fresh western disturbance is also very likely to affect Western Himalayan Region from October 22 and cause scattered to fairly widespread rain/snow over Jammu and Kashmir, Ladakh, Gilgit-Baltistan and Muzaffarabad on October 22 with isolated heavy rainfall on October 23.

Meanwhile, Char Dham Yatra, which was halted due to heavy rain in the region, will resume from today, informed Uttarakhand police chief. The pilgrimage was suspended for three days, from October 17 to 19, amid warnings of heavy to very rainfall in the hill state during this period.