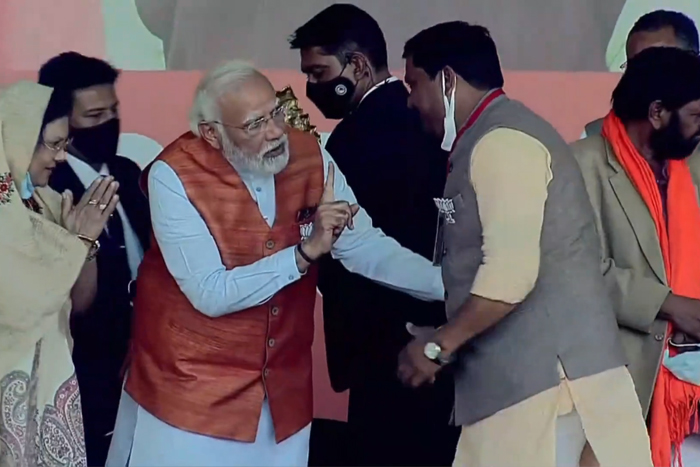 As PM Modi arrived at the rally, BJP’s UP chief Swatantra Dev Singh and BJP’s Unnao district president Awadhesh Katiyar were asked to present an idol of Lord Rama to the Prime Minister.

Katiyar, after he presented the idol, bent down and touched PM Narendra Modi’s feet.

The Prime Minister asked Katiyar to stop at once and was seen signalling to the BJP’s Unnao district president not to touch his feet.

Appointed Unnao district president by the BJP in September of last year, Awadhesh Katiyar was earlier the BJP’s district general secretary in Unnao.

Unnao district has six assembly constituencies where voting is to be held in the fourth phase of the UP elections on February 23.

“You must have seen, the father [Mulayam Singh Yadav] who was pushed from the stage was humiliated and the party was captured, he [Akhilesh] had to plead to him [Mulayam] for saving the seat [Karhal],” PM Modi said.

He also said, “For the dynasts, the biggest priority is their and their close one’s interests. If the people of UP are insulted anywhere, they turn a blind eye to it if it does not serve their interest.”

Elections to Uttar Pradesh’s 403-member Legislative Assembly are being held in seven phases with the last phase due on March 7. Counting of votes will be held on March 10.