You are here
Home > Uncategorized > The life and times of Atal Bihari Vajpayee, former prime minister and admired leader 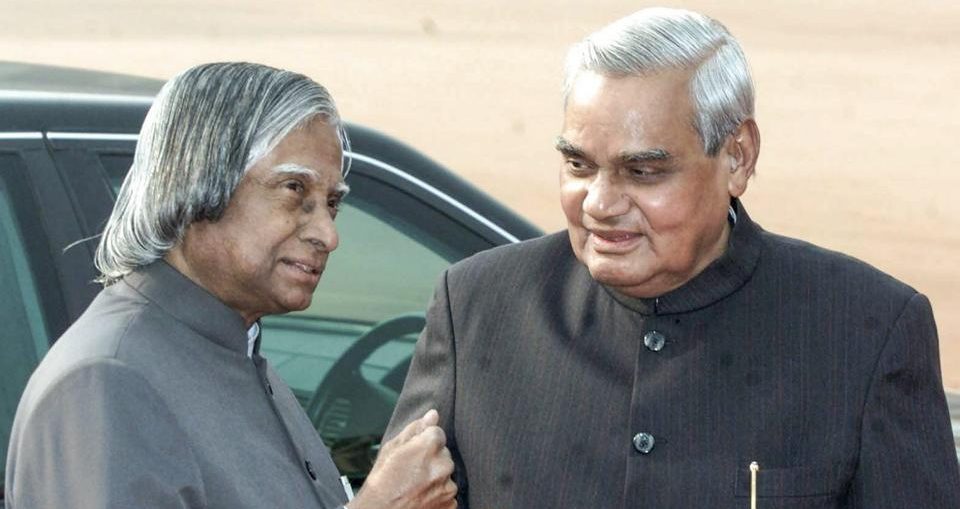 Atal Bihari Vajpayee, as Prime Minister, is seen with then President APJ Abdul Kalam in New Delhi. Vajpayee, 93, passed away on Aug 16, 2018.

Former Prime Minister Atal Bihari Vajpayee, the first non-Congress prime minister to complete a full term in office, died in Delhi on Thursday after a prolonged illness, doctors said. He was 93.

Here is a brief time of his lifeline and career.

1942: Arrested and held for 24 days. He later wrote in a piece titled ‘The Sangh is my Soul’: “I participated in the Quit India movement in 1942 and was jailed…”

1951: After working as a journalist, he joins the newly formed Bharatiya Jan Sangh

1957: Elected to the Lok Sabha for the first time

1962: Becomes a member of the Rajya Sabha

1975: Jailed during the Emergency

1977-79: Serves as the external affairs minister in the Janata Party government

1980: Cuts ties with the Janata Party and helps found the Bharatiya Janata Party. He is chosen as the president of the party

1992: Awarded the Padma Vibhushan for contribution in the field of public affairs

1996: Becomes the Prime Minister but is forced to resign in 13 days after the BJP unsuccessfully attempts to stitch together an alliance with regional parties. On May 28, he – in what has become a landmark speech — resigned on the floor of the House before a trust vote

1998: Sworn in as PM after the BJP emerges as the single largest party and forms the National Democratic Alliance government

1998: Under Vajpayee’s leadership, India conducts five nuclear tests on May 11 and 13 at the Pokhran range in Rajasthan. Seventeen days later, Pakistan conducts its own nuclear tests

1999: The government lasts a little over a year. Vajpayee resigns in April after his party loses the vote of confidence

1999: Becomes the PM for a third time in October after the NDA emerges as the largest political alliance

2000: Signs a statement on ‘US-India Relations: A Vision for the 21st Century’ along with Bill Clinton during the US President’s visit to India in March. The statement talks of a “pledge to reduce impediments to bilateral trade and investment, and to expand commerce between the two nations”

2000: In September, after an invitation to address a joint session of the US Congress, he speaks at a joint session. Vajpayee says his visit to Washington has “consolidated relations between the world’s two largest democracies and marked a new era in bilateral and global affairs”

2004: In May, he resigns as the PM following the NDA’s defeat in the Lok Sabha elections

2009: Has a stroke that impairs his speech

2015: Conferred the Bharat Ratna, the country’s highest civilian award. In a departure from protocol, President Pranab Mukherjee drives to Vajpayee’s residence and presents the award to the ailing leader. Prime Minister Narendra Modi says: “There are crores of workers around the country who draw inspiration from Atalji”