You are here
Home > DAILY BAWAL > Test blasts for Supertech twin towers in UP today; traffic to be briefly suspended 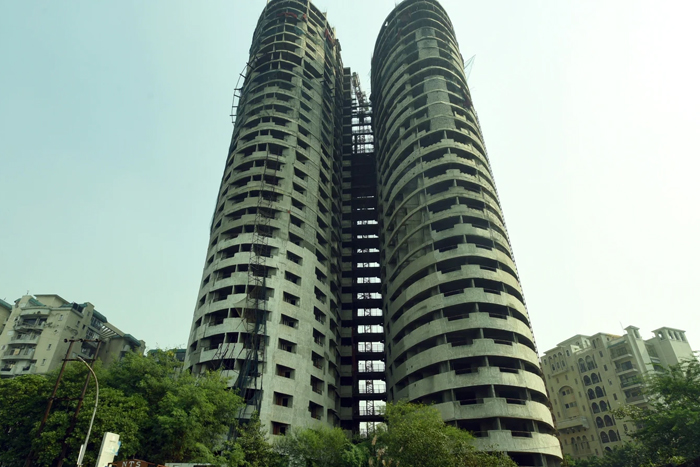 Test blasts for Supertech twin towers in UP today; traffic to be briefly suspended

A test or trial blast is required to determine the exact quantity of explosives required for the main blast.

Noida is set to see test blasts to raze down the illegally built Supertech twin towers on Sunday afternoon. The Edifice Engineering and Jet Demolitions has been roped in by the Noida authority, and the residents living nearby have been asked to stay indoors.

A test or trial blast is required to determine the exact quantity of explosives required for the main blast.

The actual demolition blast of the 32-storeyed Supertech twin towers — Apex and Ceyane — are expected to be done on May 22.

According to the local advisory issued by the firms, the test blast will take place at 2.30pm. During this period, all residents are required to remain inside their apartments and refrain from standing on their balconies. Traffic will also be suspended for 30 minutes (From 2.15pm to 2.45pm) as the area will be cordoned off by the local police. The test blast will take place on four pillars in the basements and one on the 14th floor of the illegal structures.

Local authorities have set up aluminium sheets on boundary walls as a part of preparation work for the trial. They have also set up geotextile fabric on the ground to prevent dust, splinters and debris from going out of the premises. To prevent any untoward incident, ambulances and fire tenders are asked to stay at the site on standby. Police personnel will be deployed in adequate numbers to oversee the safety work.

Additionally, teams from the Noida authority, Supertech Group, pollution department and Central Building Research Institute (CBRI) will also be present near the site. Once the blast is executed, a report will be prepared within a week, which will carry all details related to the kind and quantity of explosives that will be needed for the demolition of the entire twin towers next month.

On August 31 last year, the Supreme Court ordered the demolition of Supertech’s Apex (100 metres) and Ceyane (97 metres) towers, located in sector 93-A of Noida. The twin towers comprise around 1,000 flats and were found to be in violation of various building norms. The builder is also ordered to refund the full amount to all homebuyers who booked flats in the twin towers.

The top court had also rapped the local Noida Authority for approval of the project under its watch and allowing illegal construction.