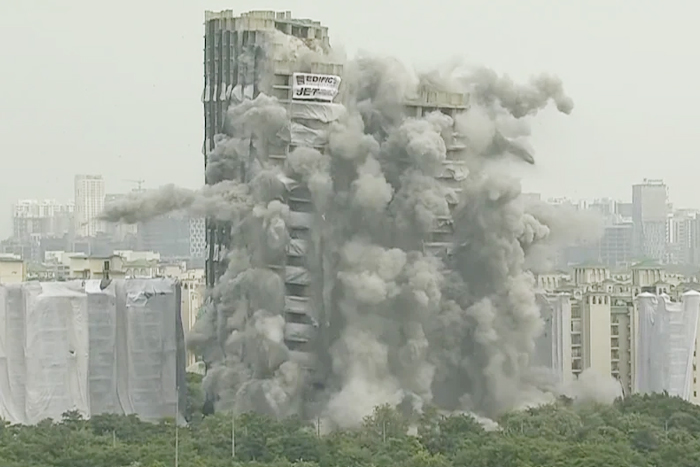 Illegally built Supertech twin towers were wiped from Noida’s skyline on Sunday in a crescendo of intrigue and apprehension of thousands who watched on, as the structures came crumbling down in a matter of 12 seconds after a series of controlled explosions around 2.30pm.

The demolition was successful, Joe Brinkkman, the mastermind behind the blast and CEO of Jet Demolitions, said, adding that no other building in the vicinity was significantly damaged in the process.

“India and Edifice have now joined the 100-metre club of countries that have buildings over that height that have been demolished. There are very few such cases and most did not have residential buildings so close, which made this extremely challenging. All credit goes to the team,” said Brinkkman.

A sudden change in wind direction posed a major challenge to the process at the last minute.

Till Sunday morning, the wind direction was towards the West. “However, the direction has suddenly changed and is towards East now, which is from Delhi towards Noida and Greater Noida,” Praveen Kumar, regional officer, UPPCB (Uttar Pradesh Pollution Control Board), said.

A westward wind would have helped in easy dissipation of the dust with a 50-acre park in that direction.

The 3,700kg of explosives bored into the pillars and walls of the two-residential buildings over the last six months went off in quick succession at 2.30pm.

Officials said the demolition left an estimated 55,000 tonne to 80,000 tonne of debris, including concrete rubble, steel and iron bars that would take three months to be disposed of.

“We were estimating some centimetres of dust on neighbouring buildings, but the dust was in millimetres. Final assessment is being done,” said Debi Prassanna Kanungo, senior principal scientist, CBRI.

About 5,000 people from the adjoining Emerald Court and ATS Village societies had left their homes, hours before the demolition under the evacuation plan. Nearly 3,000 vehicles and about 200 pets were also taken out of harm’s way for the next several hours.

Soon after the dust settled, officials said there was no significant structural damage to the high-rises next to the demolished towers. The closest residential complex was just nine metres away.

A team from Edifice, Jet Demolitions, CBRI and the Noida Authority began a structural audit of the adjoining buildings.

“The demolition was completely safe and exactly as per our calculation. About 10 metres of the boundary wall of ATS Village collapsed, which was a possible scenario. However, there was no damage at all and the debris did not even reach the closest building, Aster 2, just nine metres away,” Uttkarsh Mehta, partner at Edifice Engineering, said.

“This was a perfect execution of science and engineering and not one speck fell out of place. We were confident about the Aster 2 building. We expected debris at two places along the GAIL gas pipeline where old tyres were put but debris hit just one spot and the pipeline is safe. Even the boundary wall of ATS Village was in our contingency plan and we had already informed residents,” said Kanungo.

While the demolition was largely safe, several window glasses developed crack in both societies, officials said.

“Window glasses of several nearby apartments in both Emerald Court and ATS Village have cracked and we are assessing it. We have hired a contractor who will replace the cracked window glasses,” Mehta added.

On August 31 last year, the Supreme Court ordered the demolition of the towers, upholding a 2014 verdict of the Allahabad high court.

“The case has revealed a nefarious complicity of the planning authority in the violation by the developer of the provisions of law,” the top court observed.

The towers, built under Supertech’s Emerald Court project, were to have 40 floors each with 21 shops and 915 residential apartments. Their current market value is estimated at around ₹700 crore.