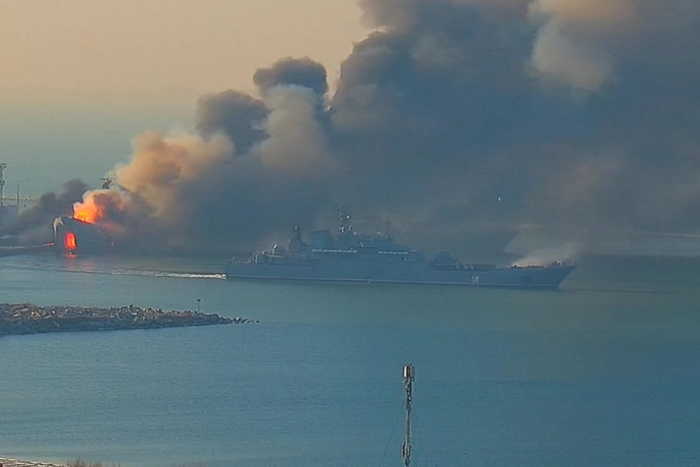 The incident on the Moskva occurred after ammunition on board blew up, Interfax news agency quoted the Russian defence ministry as saying.

Russia on Thursday said the flagship of its Black Sea fleet was seriously damaged and its crew evacuated following a fire that caused an explosion, as a Ukrainian official said the vessel had been hit by missiles.

The incident on the Moskva missile cruiser occurred after ammunition on board blew up, Interfax news agency quoted the Russian defence ministry as saying.

“As the result of a fire on the Moskva missile cruiser, ammunition detonated,” it said in a statement.

Maksym Marchenko, governor of the region around the Black Sea port of Odesa, said in an online post that the 12,500 tonne ship was hit by two missiles, without providing evidence.

Reuters was not able to independently verify either account.

Ukraine warned late on Wednesday that Russia was ramping up efforts in the South and East as it seeks full control of Mariupol, in what would be the first major city to fall.

Russia’s defence ministry on Wednesday said 1,026 soldiers from Ukraine’s 36th Marine Brigade, including 162 officers, had surrendered in Mariupol, which has been besieged for weeks, and that the port was fully under its control.

Capturing its Azovstal industrial district, where the marines have been holed up, would give the Russians full control of Ukraine’s main Sea of Azov port, reinforce a southern land corridor and expand its occupation of the country’s East.

Ukraine’s general staff said Russian forces were attacking Azovstal and the port, but a defence ministry spokesman said he had no information about any surrender.

“Russian forces are increasing their activities on the southern and eastern fronts, attempting to avenge their defeats,” President Volodymyr Zelenskiy said in a Wednesday night video address.

Reuters journalists accompanying Russian-backed separatists saw flames billowing from the Azovstal area on Tuesday, a day after Ukraine’s 36th Marine Brigade said its troops had run out of ammunition.

Senior U.S. officials are weighing whether to send a top cabinet member such as Secretary of State Antony Blinken and Defense Secretary Austin Lloyd to Kyiv in a show of solidarity, a source familiar with the situation said.

It will impose tit-for-tat sanctions on 398 members of the U.S. House of Representatives and 87 Canadian senators, Interfax cited the foreign ministry as saying, after Washington targeted 328 members of Russia’s lower house of parliament.

‘LIBERATE US FROM WHAT?’

Ukraine says tens of thousands of people are believed to have been killed in Mariupol and accuses Russia of blocking aid convoys to civilians marooned there.

Its mayor, Vadym Boichenko, said Russia had brought in mobile crematoria “to get rid of evidence of war crimes” – a statement that was not possible to verify.

In the village of Lubianka northwest of Kyiv, from where Russian forces had tried and failed to subdue the capital before being driven away, a message to Ukrainians had been written on the wall of a house that had been occupied by Russian troops.

The Kremlin says it launched a “special military operation” to demilitarise and “liberate” Ukraine, a message villagers said had been repeated to them by the Russian troops.

Polish President Andrzej Duda said on a visit to Kyiv with his Lithuanian, Latvian and Estonian counterparts that those who had committed and ordered crimes must be brought to justice.

Germany’s president did not join them as he had planned.

Zelenskiy said there had been no official approach and one of his officials denied a newspaper report he had rejected the visit due to Steinmeier’s recent good relations with Moscow.

The Kremlin denounced President Joe Biden’s description of Moscow’s actions in Ukraine as amounting to genocide, with spokesman Dmitry Peskov saying this was unacceptable coming from the leader of a country he said had committed crimes of its own.

An initial report by a mission of experts set up by the Organization for Security and Cooperation in Europe documents a “catalogue of inhumanity” by Russian troops in Ukraine, according to the U.S. ambassador to the OSCE.

Russia has denied targeting civilians and has said Ukrainian and Western allegations of war crimes are fabricated.

The Kyiv district police chief said 720 bodies had been found in the region around the capital from where Russian forces had retreated, with more than 200 people missing.

The mayor of the northeastern city of Kharkiv, Ukraine’s second largest, said bombing had increased significantly on Wednesday and satellite photos from Maxar Technologies showed long columns of armoured vehicles in the region.

Reuters could not immediately verify his statement but filmed people in Kharkiv quietly carrying bodies from an apartment block hit by shelling.