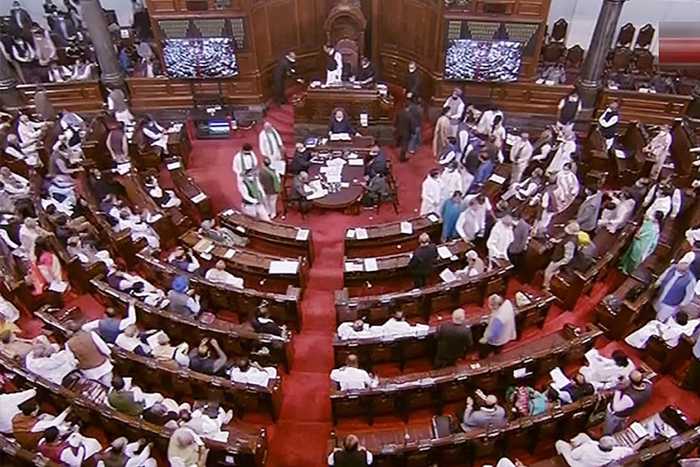 Parliament on Monday passed the bill to repeal the three contentious agricultural laws at the centre of protests by farmers for over a year, with the Lok Sabha and the Rajya Sabha giving their approval in quick succession amid an uproar on the first day of the Winter session without any discussion as demanded by the opposition.

Though the repeal bill was passed by voice vote within minutes of its introduction, opposition members continued their protest, demanding a discussion on farmers’ issues, including legal sanctity to minimum support price (MSP) of crops and compensation to families of farmers who died during the year-long agitation.

Terming the move a victory of the protesters, the Samyukt Kisan Morcha called an emergency meeting on Wednesday to discuss the future course of action.

Introducing the repeal bill in the two Houses, agriculture minister Narendra Singh Tomar said Prime Minister Narendra Modi has kept his word as the government brought the bill on the very first day of the Winter session of Parliament.

Stating that Modi “showed a big heart” by announcing the repeal of the laws on Guru Nanak Jayanti on 19 November, Tomar sought the support of the members in its passage without a discussion, noting that both the government and opposition are in favour of repealing the three laws.

He also attacked Congress for adopting a “double standard” on the laws, as its own election manifesto talked about the need for reforms in the farm sector.

Reacting to the accusation by the opposition of not allowing a discussion, Tomar said there was unanimity on the issue as both the government and opposition parties wanted to nullify the legislations.

Outside Parliament, Congress leader Rahul Gandhi alleged that repealing of the three farm laws without a debate shows that the government is “terrified” of having a discussion and “knows that it has done something wrong”.

Tomar, however, suggested that a discussion on the bill could have started in Lok Sabha but protests by opposition parties ruled it out.

Speaker Om Birla repeatedly told opposition members that he was ready for initiating a discussion if they went back to their seats, Tomar noted.

The air at the protest sites at three Delhi border points—Singhu, Ghazipur and Tikri—was filled with chants and slogans as farmers danced to the tunes of Bhangra and Punjabi songs. At Singhu border, farmers also showered flower petals at each other to celebrate the “victory of the movement”.

Later, SKM, in a statement, said the repeal of farm laws is the first major victory of the farmers’ movement while other important demands are still pending.

Tomar introduced the Farm Laws Repeal Bill, 2021, which said:“Even though only a group of farmers are protesting against these laws, the government has tried hard to sensitise the farmers on the importance of the Farm Laws and explain the merits through several meetings and other forums.”

Without taking away the existing mechanisms available to farmers, new avenues were provided for the trade of their produce, the copy of the bill said, noting that the laws have been stayed by the Supreme Court.