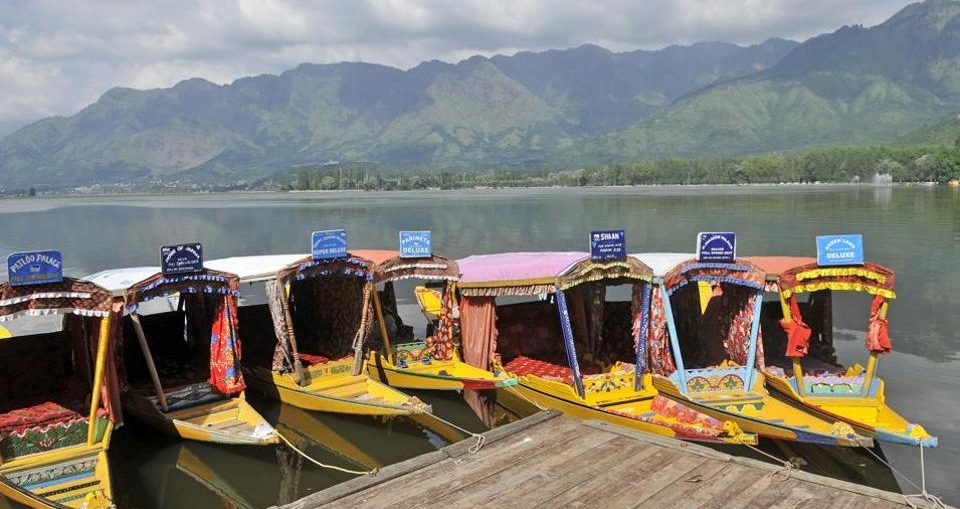 Kashmir went through a series of curfew and shutdowns for almost five months since Hizbul Mujahideen militant Burhan Wani was killed by security forces.

Shikara boats are lined up on the Dal Lake.

The Dal Lake shimmers under the summer sun and the waves lap at the bank in a never-ending procession; a quintessential picture-postcard setting at one of Kashmir’s most iconic tourist destinations.

But for Mohammad Amir, who takes tourists for rides on his shikara – a canopied paddle boat – this natural beauty has no meaning if there is no one to admire what Mughal emperor Jahangir once described as a “paradise”.

Tourist inflow to the Valley has come down to a trickle after months of unrest in 2016, crippling one of the pillars of Kashmir’s economy that is still struggling to recover from the blow.

Amir, 35, said he can’t even repay Rs 20,000 he had taken from the in-laws of his sister to repair his boat damaged in the devastating floods of 2014.

“2015 was so-so but in 2016, due to the unrest starting July, business was miserably down. Today, I am ashamed to face the in-laws of my sister as I have no money to repay them,” Amir said.

He had hoped that the tourist seasons in the next few years will give him a good business and help him re-build his house, which was also damaged in the floods.

Kashmir went through a series of curfew and shutdowns for almost five months since Hizbul Mujahideen militant Burhan Wani was killed by security forces on July 8 last year.

Over 90 people were killed and thousands were injured in the protests that followed. Shops and offices remained closed, students sat at home as school and colleges remained locked and businesses collapsed.

“Our economy is not on track. The major problem is investments are not happening. The only investment I see in J-K is construction work. Unless we have peace and stability, you will not be able to create anything,” finance minister Haseeb Drabu said on Wednesday.

Though Kashmir kicked back to life towards the end of 2016, the Valley’s political and law and order situation have remained on the edge, dotted by frequent gun-battles, shooting down of civilian protesters, cordon and search operations, curfew and shutdowns.

The biggest blow due to the unrest was the industry. The state economic survey report 2016 said the estimated loss suffered by the sector is Rs 13,291 crore, out of which Rs 6548 crore is of the private sector.

“The tourist season had started during 2016 in April and was in full swing up to end of July 7. The remaining about 4 months… remained completely tense and registered closure of all activities due to turmoil, resulting in almost zero arrival of tourists in the valley,” the report added. The revenue loss for four months was estimated at around Rs 752 lakh.

Sources in the tourism department said this year too, there was a reduction of almost 60% visitors between January to June, compared to the corresponding period last year.

Drabu said in his presser the government’s thrust was to build infrastructure but its efforts to attract investments not been successful for various reasons.

“I had advanced the budget to January and 50% of the money was released by February 10 so that we could spend more but honestly speaking we are not able to do so. The situation is not (suitable),” Drabu said.

Mushtaq Wani, president of the Kashmir Chamber of Commerce and Industry, said the state lost almost Rs 100 crore every day during the unrest. “Every sector of the economy including tourism, handicraft and horticulture suffered miserably due to the unrest. There is still no revival of the suffering economy. And the way 2017 is appearing, if it continues this way, then all businesses and trade will die in Kashmir,” he added.

To make matters worse, the one of the cable cars in Gulmarg – a major tourist attraction – crashed last month, killing seven people. Four of them were tourists from Delhi.

“For the industry, this unfortunate accident could not have come at a worst time,” said Mahmood Ahmad Shah, director of the tourism department.

For people like Mohammad Amir, who survive on tourism, the situation is one of desperation.He used to earn anything between Rs 1,500 to Rs 2,000 daily when things were normal. Now he barely manages Rs 400 in two days. His boat now mostly remains moored at the bank.

A special series by Hindustan Times takes a deep look at the ground reality in the Valley as it braces itself for the first death anniversary of militant commander Burhan Wani and increasing violence in J-K.