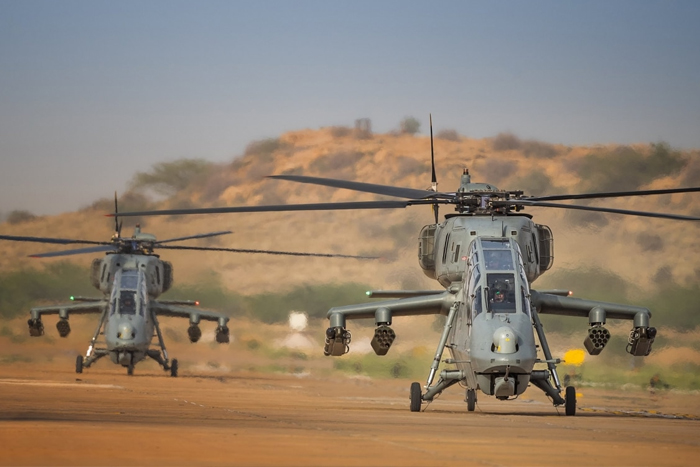 The Indian Air Force (IAF) got the indigenously made Light Combat Helicopter (LCH) on Monday. The choppers were inducted officially by Defence Minister Rajnath Singh in Jodhpur.

The LCH, the newest induction into the Indian Air Force, was named Prachand. The LCH is a dedicated combat helicopter designed and developed indigenously for the first time in India. Defence Minister Rajnath Singh also took a sortie in a helicopter flown by the Commanding Officer, Group Captain Deepak Vishnoi.

The morale in the 143 Helicopter Unit, also called the Dhanush Squadron, was high. Young pilots were excited to be part of the squadron with the new helicopters.

“To quote a famous boxer, Mohammed Ali, all I can say is this machine flies like a butterfly and stings like a bee,” sharing his experience of flying the LCH, Wing Commander Saurabh Sharma, who is also the Flight Commander of Dhanush Squadron 143 Helicopter Unit said.

“It’s a very agile machine, nimble, and the rotor system makes it extremely manoeuvrable. Its all-weather capability of flying day and night is a result of careful planning,” he added.

“The josh is really high, we are all excited. It’s a big day not just for us but for the entire nation as the Light Combat Helicopter gets inducted,” said Squadron Leader Anuj.

Squadron Leader Anuj, one of the young pilots, stated the advantage of having a helmet-mounted display.

“Helmet mounted display, in a simple language, means where I look, my gun will get pointed in that direction. That makes targeting easy. It has a 20 mm turret gun capable of delivering 400 rounds,” Squadron Leader Anuj said.

“Flying this (LCH) is a great experience, and since it has a state-of-the-art navigation system and new avionics, it’s a different experience altogether,” said Squadron Leader Lavpreet Sharma.

The agility and manoeuvrability make the LCH an appropriate choice for mountain warfare as it can take off and land with a payload even at 16,000 feet.

It would be a potent platform to meet the operational requirements of the Indian Air Force and the Indian Army.

The Light Combat Helicopter Limited Series Production (LSP) is an indigenously designed, developed, and manufactured state-of-the-art modern combat helicopter with 45% indigenous that will increase to more than 55%.

The HAL is ready to provide 150 LCH to the forces if required and is looking at the production of 30 helicopters annually.