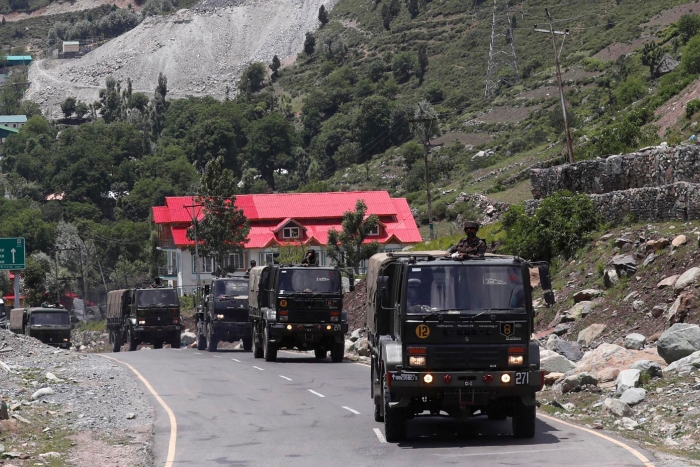 With no significant headway made for a resolution to the border row in eastern Ladakh following multiple rounds of military talks, the Home Ministry has asked forces to tighten vigilance along borders with China, Nepal and Bhutan.

India has tightened vigilance at its borders with Nepal, Bhutan following renewed tensions with China in Ladakh. The armed forces, guarding India’s borders, have reportedly been asked to remain on high alert amid rise in tensions along the Line of Actual Control.

Following an unsuccessful attempt by the Chinese to change the status quo, the Indian Army strengthened its presence on a number of “strategic heights” and enhanced deployment of troops and weapons at key points around the Pangong lake in eastern Ladakh. On Tuesday again, China engaged in “provocative action” even as military talks were underway.

Here are the latest developments on the India-China faceoff:

The Home Ministry has put the forces guarding the Indian borders on alert after fresh face-off with China. The decision was taken after a high-level meet on Tuesday. An alert has been issued along the borders with China, Nepal and Bhutan. Sources said instructions have been given to the Indo-Tibetan Border Police (ITBP) to remain alert on borders in Uttarakhand, Arunachal, Himachal, Ladakh and Sikkim. The Sashastra Seema Bal (SSB), which guards the Indo-Nepal and Bhutan border, have also been asked to heighten vigilance.

The military talks between India and China will continue on Wednesday. The Brigade Commander-level talks will be held in Chushul/Moldo to discuss the ongoing issues along the southern bank of Pangong Tso lake, the Indian Army sources said. The military talks are being held to ease escalating tension triggered by fresh confrontation between the two sides on the southern bank of the Pangong lake. The sources said the meeting on Monday and Tuesday did not produce any concrete outcome.

Amid fresh face-off in Ladakh, the US has once again backed India. As per an American intelligence assessment, China deliberately provoked India with a new incursion into contested territory. The US report added that Beijing remains enraged that its local commander withdrew forces when a physical conflict appeared imminent. “We are staggered at the timing of the Chinese actions,” the intelligence assessment read. The US State Department, meanwhile, said that the situation along the LAC was being closely monitored. “What’s so disturbing is emergence of clear pattern of Beijing acting increasingly aggressively, both domestically and abroad,” it added.

Even as military talks were on to defuse tensions, China once again engaged in “provocative action” two days after the PLA made a bid to change the status quo in the south bank area of Pangong lake. “On August 31, even as the ground commanders of the two sides were in discussions to de-escalate the situation, the Chinese troops again engaged in provocative action. Due to the timely defensive action, the Indian side was able to prevent these attempts to unilaterally alter the status quo,” External Affairs Ministry Spokesperson Anurag Srivastava said added.

India called the attempts a reflection of “complete disregard” to bilateral understandings. External Affairs Ministry Spokesperson Anurag Srivastava said the Indian side was able to prevent these attempts to unilaterally alter the status quo due to the timely “defensive action”, and asked China to “discipline and control” their frontline troops from undertaking such “provocative” actions. He said the Chinese side violated previously agreed understanding and engaged in provocative military manoeuvres in the late night of August 29 and on August 30. The attempt seen as China’s bid to open a new front in the prolonged border standoff in a fresh confrontation was thwarted by the Indian troops.

The Indian Army has, meanwhile, significantly strengthened its presence on a number of “strategic heights” and enhanced deployment of troops and weapons at key points around the Pangong lake in eastern Ladakh following an unsuccessful attempt by the Chinese PLA to unilaterally change the status quo in the area. The Army has also further bolstered overall surveillance mechanisms in all areas along the LAC in eastern Ladakh after foiling China’s fresh attempt to occupy an area on the southern bank of Pangong lake, they said. Defence Minister Rajnath Singh on Tuesday carried out a comprehensive review of the situation in eastern Ladakh. It was decided at the nearly meeting that Indian Army will continue to maintain its aggressive posturing in all sensitive areas along the LAC to effectively deal with any Chinese “misadventure”, official sources said.

China has claimed it has “not occupied an inch” of other country’s territory nor “provoked” a war in its 70-odd year history and its border troops never crossed the Line of Actual Control (LAC) with India. The fresh attempt by China to change the status quo in the Pangong lake area is the first major incident in the area after the Galwan Valley clashes on June 15 in which 20 Indian Army personnel were killed. China also suffered casualties but is yet to make the details public. According to an American intelligence report, it was 35.