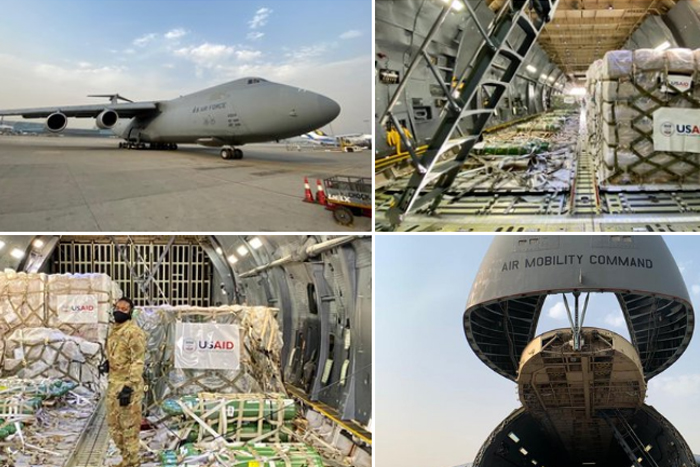 India received the first Covid emergency aid supplies from the United States this morning as the country fights a deadly second wave that has strained the healthcare system. Over 3 lakh cases are getting added to the country’s caseload everyday for more than a week, and SOS messages for hospital beds and medical oxygen have flooded social media.

The first of several emergency COVID-19 relief shipments from the United States has arrived in India! Building on over 70 years of cooperation, the United States stands with India as we fight the COVID-19 pandemic together. #USIndiaDosti pic.twitter.com/OpHn8ZMXrJ

In a tweet, the US Embassy shared pictures of the supplies and said: “The first of several emergency COVID-19 relief shipments from the United States has arrived in India! Building on over 70 years of cooperation, the United States stands with India as we fight the COVID-19 pandemic together. #USIndiaDosti (sic).” US officials said the special flights, which will also bring equipment donated by companies and individuals, will continue into next week.

Earlier this week, US President Joe Biden pledged sustained support to India in its fight against Covid. “Just as India sent assistance to the United States as our hospitals were strained early in the pandemic, we are determined to help India in its time of need,” Mr Biden said in a tweet.

The United States is “delivering supplies worth more than $100 million in the coming days to provide urgent relief to our partners in India,” State Department spokesman Ned Price said on Thursday.

Prime Minister Narendra Modi and Mr Biden had a telephonic conversation on Monday to discuss the Covid situation in both the nations. “We discussed the evolving COVID situation in both countries in detail. I thanked President Biden for the support being provided by the United States to India,” PM Modi said shortly after the meeting.

In a statement, the White House said: “The President pledged America’s steadfast support for the people of India who have been impacted by the recent surge in COVID-19 cases… the United States is providing a range of emergency assistance, including oxygen-related supplies, vaccine materials, and therapeutics”.

With over 1.87 crore total cases, India has logged the second highest number of Covid cases after the United States that has recorded 3.22 crore infections so far. More than 5.7 lakh people have died in US since the start of the pandemic; 2.08 lakh deaths have been recorded in India.

The second Covid wave, however, has hit India like a storm and has “shaken the country”, PM Modi said last week.

Opposition leaders have criticised the government for failing to improve the country’s health infrastructure despite having a year to prepare. Shortage of medical oxygen, vaccines and medicines has been red-flagged by several states.

As cases continue to rise, the United Kingdom, Russia, China and several other nations have also resolved to help India.