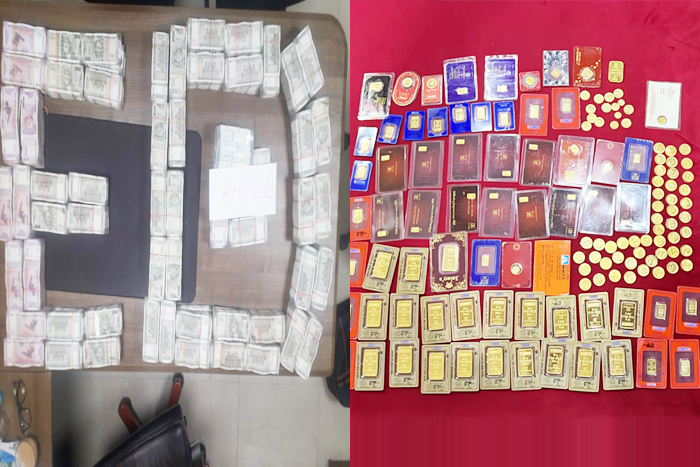 ED conducted searches on Monday under PMLA on the premises of Delhi health minister Satyendar Jain and others.

The Enforcement Directorate (ED) on Tuesday said “unexplained” cash of ₹2.85 crore and 133 gold coins were seized after its day-long raids conducted on the premises of Delhi health minister Satyendar Jain and his alleged associates as part of a money-laundering investigation against him.

ED has conducted searches on 6.6.2022 under PMLA,2002 at the premises of Satyendar Kumar Jain and others. Various incriminating documents, digital records, cash amounting to Rs. 2.85 Crore and 133 gold coins weighing 1.80 kg in total from unexplained source have been seized. pic.twitter.com/WYSDPkPrXN

It added, “Investigation revealed that one accomplice member of M/s Lala Sher Singh Jivan Vigyan Trust had provided accommodation entries for transfer of land from company beneficially owned by Satyendar Kumar Jain to family members of accomplices in order to alienate the property and to frustrate the process of confiscation.”

Jain, 57, was arrested on May 30 under the criminal sections of the Prevention of Money Laundering Act (PMLA) and he is in ED custody till June 9.

The ED had conducted searches on about seven premises, including that of a jeweller, in Delhi and some neighbouring locations on Monday.

Jain, a minister without portfolio in the Arvind Kejriwal government, is being probed by the federal agency under the PMLA on charges of alleged hawala dealings.

Delhi chief minister Arvind Kejriwal alleged that Prime Minister Narendra Modi was with full force behind the AAP. “You have the power of all agencies, but God is with us,” he tweeted.

Defending his minister, Kejriwal said last week that Jain is honest and a patriot, who was being framed in a false case. He also said deputy chief minister Manish Sisodia is next on the target list of the central agencies and is likely to be arrested.

“I have come to know from the same sources that in the next few days the central government is going to arrest Manish Sisodia,” Kejriwal said last week. “The Centre has asked all central agencies to prepare a fake case against Sisodia and arrest him.”

“Investigation by ED revealed that during the period 2015-16, when Jain was a public servant, the companies beneficially owned and controlled by him received accommodation entries to the tune of ₹4.81 crore from shell companies against cash transferred to Kolkata-based entry operators through the hawala route,” said the agency that investigates financial crimes.

The probe found that Kolkata-based shell companies were controlled by Rajender Bansal and Jiivendra Mishra, who admitted during questioning that their main business was to provide accommodation entries through shell companies to various beneficiaries, whether in the form of share capital or unsecured loans at a commission of 15 to 20 paisa per ₹100, the ED said.