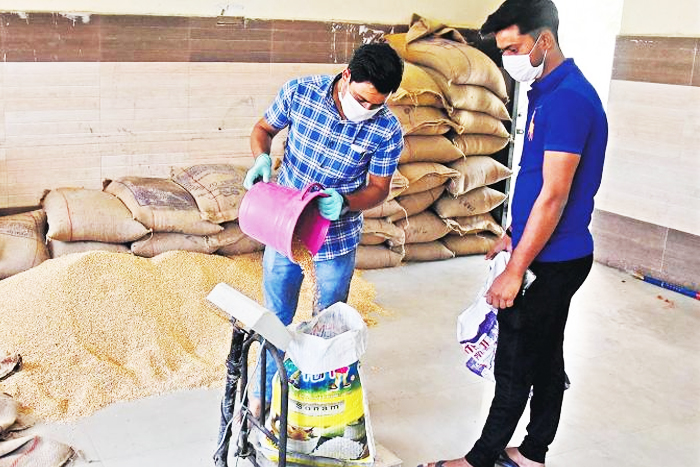 The Delhi government had cleared the proposal to allow home delivery of rations to all cardholders of the capital last year.

The central government has blocked plans to launch doorstep delivery of rations in Delhi from next week, the Arvind Kejriwal administration said on Saturday, in the latest episode of the tussle between the two sides that share responsibilities in the national capital.

“Delhi government was all set to launch Doorstep Delivery of Ration scheme across Delhi within 1-2 days, benefiting 72 lakh poor beneficiaries. Based on central government’s suggestion, cabinet passed a decision to remove the name ‘Mukhyamantri Ghar Ghar Ration Yojna‘ for the scheme and to implement doorstep delivery as part of the existing NFS Act, 2013. This addresses all the concerns of central government,” Mr Kejriwal’s government said in a statement.

“[However] LG (Lieutenant Governor) has rejected the file for implementation of Doorstep Delivery of Ration citing two reasons – centre is yet to approve the scheme, and an ongoing court case. No approval for launching such a scheme is required as per existing law,” it added.

Sources, however, have said the file pertaining to ‘notification on home delivery of processed and packaged ration under TDPS’, proposed to be implemented through a private vendor/vendors, had been returned for re-consideration since the proposal seeks to change the method of distribution.

Sources added that this would mandatorily require the prior approval of the central government.

They also pointed to a writ petition pending in the Delhi High Court – filed by the Delhi Sarkari Ration Dealers Sangh that challenge the proposed arrangement of doorstep delivery of ration by the Delhi government, to which the central government is also a party.

On Twitter, Delhi’s ruling Aam Aadmi Party made a direct attack on Prime Minister Narendra Modi: “Mr Prime Minister, what kind of an arrangement do you have with the ration mafia that you had to stop the Kejriwal government’s ‘Ghar Ghar Ration Scheme’?”

The central government had flagged several concerns about the scheme in March saying it could result in ration card holders buying grains and other necessities at a higher rate than that fixed under a central law, according to news agency PTI.

According to the Union Ministry of Consumer Affairs, Food and Public Distribution, the scheme could also make it difficult for recipients of the subsidies to relocate and stall a shift towards biometric verification of beneficiaries, PTI reported.

The Delhi government had cleared the proposal to allow home delivery of rations to all cardholders of the capital last year in July to implement one of the major promises made by the Aam Aadmi Party in the run-up to the assembly polls held in February.

The scheme called ‘Mukhya Mantri Ghar Ghar Ration Yojana‘ would let the beneficiaries under the National Food Security Act (NFSA), 2013 get the rations delivered home, making visits to the shops optional and eliminate corruption, the Delhi government had said.

The Delhi government had initially planned to roll out the scheme in March.

However, expressing reservations about the programme, Union Food Secretary Sudhanshu Pandey told PTI it was “a complete deviation from the National Food Security Act and not permissible”. He said the scheme could result in beneficiaries paying extra for packaging and handling.

Chief Minister Arvind Kejriwal said he was prepared to give up the “Mukhya Mantri” tag in the name of the scheme if it soothed the central government’s ego but asserted, “We will accept all conditions of the centre but will not allow any obstruction in implementation of the scheme.”