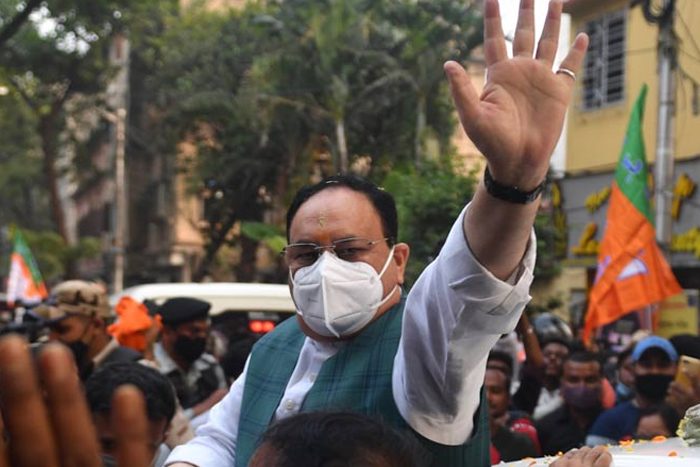 Five rath yatras are planned, the first this Saturday by BJP president JP Nadda from Nabadwip in south Bengal.

Till now, roadshows were the BJP’s big campaign tool in Bengal – leaders atop an open truck bedecked with marigolds travelling short distances. But the party is now stepping on the gas in the race for the Bengal assembly and deploying the chariot.

Five rath yatras are planned, the first this Saturday by BJP president JP Nadda from Nabadwip in south Bengal. On February 11, Amit Shah will flag off a rally from Cooch Behar in north Bengal. The three other starting points are Jhargram, Kakdwip and Tarapith. The rallies will crisscross all 294 assembly seats in Bengal. Each rally will run for about 25 days.

The move has sparked controversy.

Rath yatras are legitimate political tools, says the BJP. Provocation, says Trinamool. The state government has deflected BJP’s queries on “peaceful conduct” of the yatra and public rallies along the route to “local administrative authorities”. A Calcutta High Court lawyer filed a petition saying the rath yatras will provoke communal tensions and should not be allowed. It may be listed for hearing on Friday, February 5.

The BJP claims these are steps to stifle the opposition’s voice.

“The opposition has the right to go to the people in a democracy. But Mamata Banerjee’s government always tries to silence them,” said Kailash Vijayvargiya, the BJP’s national general secretary. “The yatras will expose corruption in the Mamata Banerjee government on coal scam, cow smuggling, tolabaji”.

The BJP has billed these yatras “parivartan yatras” or rallies for change. BJP’s Bengal spokesman Samik Bhattacharya said, “This yatra is only for politics. This rath yatra is not for building Ram Mandir or any other temple. This is simply for ‘parivartan’ (change).”

Parivartan was Mamata Banerjee’s slogan back in 2011 when she ousted the Left Front government which was in power for 34 years. The BJP is now calling for “Parivartan of Parivartan“.

The Trinamool is being cautious about BJP’s rath yatra plan. After Mamata Banerjee’s outburst against Jai Sri Ram slogans in 2019, the BJP had turned it into a war cry — one that resurfaced on Netaji’s birth anniversary event at the Victoria Memorial on January 23.

The Trinamool has been careful not to openly attack the rath yatra plan and enable the BJP to play victim.

Trinamool secretary general Partha Chatterjee said, “Permissions for the rath yatra is a completely administrative matter. Let the administration decide. We don’t want to destroy our culture. We must protect the secular value of the state”.

Trinamool minister Bratya Basu said, “Each movement of the BJP is to polarise Bengal and create a division in Bengal.”

Few doubt the provocative potential of a rath yatra in a state already communally polarised.

The BJP since 2014 has repeatedly charged Mamata Banerjee with minority appeasement. In the last five years, the state has seen major riots at Dhulagarh, Bashirhat and Asansol.

“By the time they get underway, the model code of conduct will be in place and central security forces too, minimising chances of violence. I also believe the government strategy is to give permissions in some districts and not in Muslim-dominated districts.”

However, some BJP initiatives in the past have caused tensions. In April 2017, the Bengal BJP launched sword wielding rallies on Ram Navami, turning the usually low-key festival in Bengal into a brash political duel.

Some Trinamool leaders had ended holding their own sword rallies to compete. Cases under the Arms Act were filed against leaders from both parties.

For the BJP, it paid dividends in 2019 – the party jumped from two parliamentary seats in the state to 18.

The petition against rath yatras may derail the plan. In 2019, the Supreme Court had said no to the yatras, citing the state’s concerns on law and order issues.

Even if the chariots don’t finally roll, BJP’s rath yatra plan is now firmly part of the poll conversation in Bengal.