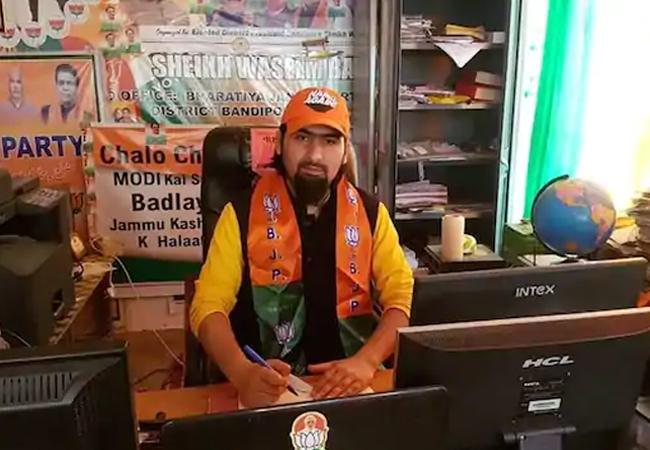 BJP president JP Nadda and National Conference leader Omar Abdullah condemned the terrorist attack on the BJP functionary and his family in Bandipora.

Kashmir: In a dastardly act, terrorists shot dead BJP leader Wasim Ahmad Bari, his father and brother in Bandipora area in Jammu and Kashmir on Wednesday. The unfortunate incident happened when the terrorists opened indiscriminate fire on the BJP district president outside his shop near a police station in Bandipora at around 9 pm.

Shocked and saddened by d killing of young BJP leader Wasim Bari and his brother by terrorists in Bandipora. Bari’s father who is also a senior leader was injured. This despite 8 security commandos. Condolences to d family. pic.twitter.com/hAKnOudaxj

Two members of Bari’s family, including his brother Omar Bari and father Bashir Ahmed also sustained bullet injuries and were rushed to Bandipora district hospital where they succumbed to injuries.

BJP national president JP Nadda condemned the cowardly attack on Bari and his family and assured that the sacrifice will not go in vain.

“We lost Sheikh Waseem Bari, his father & brother in Bandipora, J&K today in a cowardly attack on them. This is a huge loss for the party. My deepest condolences are with the family. The entire Party stands with the bereaved family. I assure that their sacrifice will not go in vain.” Nadda tweeted.

Giving details of the incident, DGP Dilbagh Singh said Bari’s brother and father were injured in the firing and taken to Bandipora district hospital where they succumbed to injuries.

Notably, the family had eight security guards, but none of them were present at the time of the attack.

“Police registered a case in this regard under relevant sections of law. The men deployed for his security are being detained for negligence under Police Act,” Singh told ANI.

BJP national secretary Ram Madhav expressed shock over Bari’s killing. “Shocked and saddened by d killing of young BJP leader Wasim Bari and his brother by terrorists in Bandipora. Bari’s father who is also a senior leader was injured. This despite 8 security commandos. Condolences to d family,” he tweeted.

“Sorry to hear about the murderous terror attack on the BJP functionaries & their father in Bandipore earlier this evening. I condemn the attack. My condolences to their families in this time of grief. Sadly the violent targeting of mainstream political workers continues unabated,” Abdullah tweeted.

Delhi: Man held for trying to film woman on board Metro train