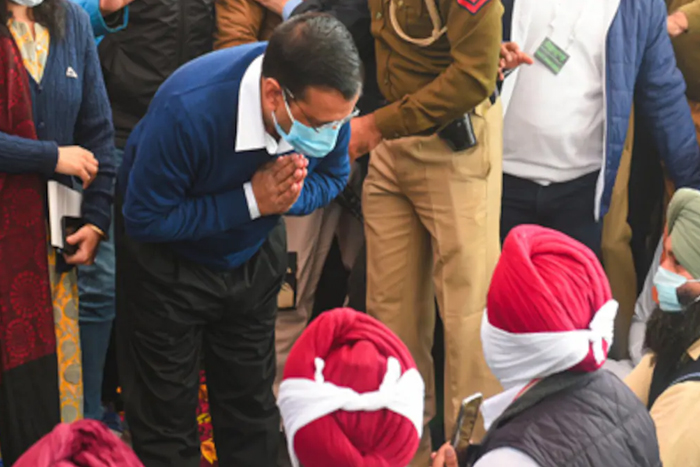 Arvind Kejriwal’s home has been barricaded, AAP claimed today. The police posted a photo on Twitter denying the allegation.

New Delhi: The Aam Admi Party (AAP) today alleged that Delhi Chief Minister Arvind Kejriwal has been placed under house arrest by Delhi Police since Monday, particularly in the wake of his visit to the Singhu border on Monday and the Bharat Bandh called today by farmers protesting against the new central agricultural laws. Senior police officials, however, denied the allegation.

The party said that under the Union home ministry’s orders, the police have got the three mayors of Delhi’s various municipalities to protest before the Chief Minister’s residence, creating a pretext for his detainment. Mr Kejriwal’s residence has, thus, been barricaded completely, with none allowed to enter or leave the premises.

All of his official meetings have been cancelled for the day given the circumstances, AAP leaders said.

Delhi Police Deputy Commissioner for North District, Alok Kumar Verma, denied the party’s allegations, dubbing them “lies” and “baseless”. “We are alert. Arvind Kejriwal left home at around 8pm yesterday and returned around 10pm. There is no issue at all,” Mr Verma said.

Mr Kejriwal had visited the Singhu border point between Delhi and Haryana on Monday to meet the protesting farmers and enquiring about their welfare. Thousands of farmers have been parked there, along with other border points with Delhi and other states, in protest against the central government’s far ordinances passed in September.

They have been seeking the unconditional repeal of the three laws that they view as severely harmful to them. The protesters have called for a Bharat Bandh today, a move supported by several political parties, including the Congress, the Left, the SP, and the BSP.

Anticipating trouble, several leaders of various parties in Uttar Pradesh, including SP chief Akhilesh Yadav, have allegedly been detained or put under house arrest-like conditions. On Monday, Mr Yadav tried to break barricades and leave for protest rally in Kannauj, but was detained by the police.