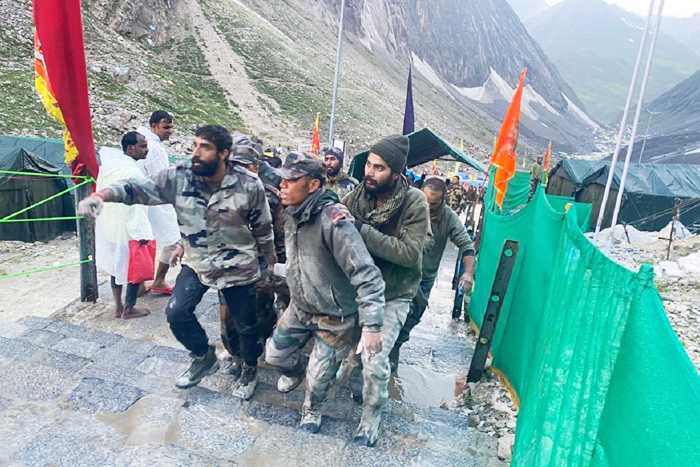 The cloudburst was first reported at 5.30pm, with police saying some tents and langars coming under the same. Various teams of the NDRD, SDRF, and even Indian Army’s Norther Command are currently engaged in rescue operation.

The cloudburst incident was initially reported at 5.30pm, with Kashmir Police chief ADG Vijay Kumar saying some langars and tents came under the flash flood. He added that the injured people are being airlifted for treatment.

The cloudburst occurred following heavy rain in the upper reaches of the Amarnath cave.

Authorities in the Valley has released helpline numbers of the NDRF, Amarnath Shrine Board and the Kashmir division for better assistance in this scenario.

Indian Army personnel have also joined hands with relevant central agencies to speed up the rescue operation. Quoting the Northern Army Command, ANI reported that as many as six rescue teams have been deployed for the purpose. Helicopters and personnel of the Indian Air Force (IAF) have also been kept on standby for rescue operation.

The India Meteorological Department (IMD) meanwhile has predicted heavy rainfall with thunderstorm and lightning over Jammu and Kashmir on July 10.