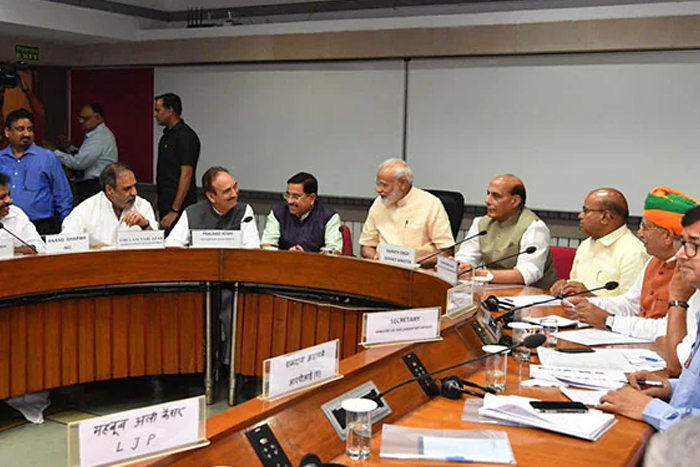 The government bill for repeal of the farm laws has been listed for introduction and passage in the Lok Sabha on the first day of the session on Monday.

The cancellation of farm laws will be one of the prime talking points at the all-party meeting today that is likely to be helmed by Prime Minister Narendra Modi, a day before the beginning of the Winter Session of Parliament.

The meeting – which will also likely see price rise issue and the farmers’ demand on legal guarantee on Minimum Support Prices being raised – is set to begin at 11 am.

The government bill for repeal of the farm laws has been listed for introduction and passage in the Lok Sabha on the first day of the session on Monday.

The bill will be introduced by the Union Agriculture Minister Narendra Singh Tomar in the house.

The ruling BJP and main opposition party Congress have issued whips to their MPs to be present on the day.

“Union Agriculture Minister Narendra Singh Tomar will move for leave to introduce a Bill to repeal the Farmers (Empowerment and Protection) Agreement on Price Assurance and Farm Services Act, 2020, the Farmers” Produce Trade and Commerce (Promotion and Facilitation Act) Act, 2020, the Essential Commodites (Amendment) Act, 2020 and to amend the Essential Commodities Act, 1955. Also to introduce the bill,” Lok Sabha’s list of business for November 29, states.

The same evening the BJP will hold its parliamentary executive meeting. The NDA floor leaders are expected to meet around 3 pm.

Farmers on Saturday deferred their ‘sansad chalo’, or ‘march to Parliament’ call after a meeting of farmers’ front Samyukt Kisan Morcha. They said they will wait till December 4 before announcing their next decision.

Last week Prime Minister Narendra Modi, in a stunning U-Turn, said the farm laws would be rolled back, and asked farmers to stand down and return home, something they refused.

They farmers say the agitation will go on till the laws are formally repealed and all demands, including legal guarantee for MSP, are met.