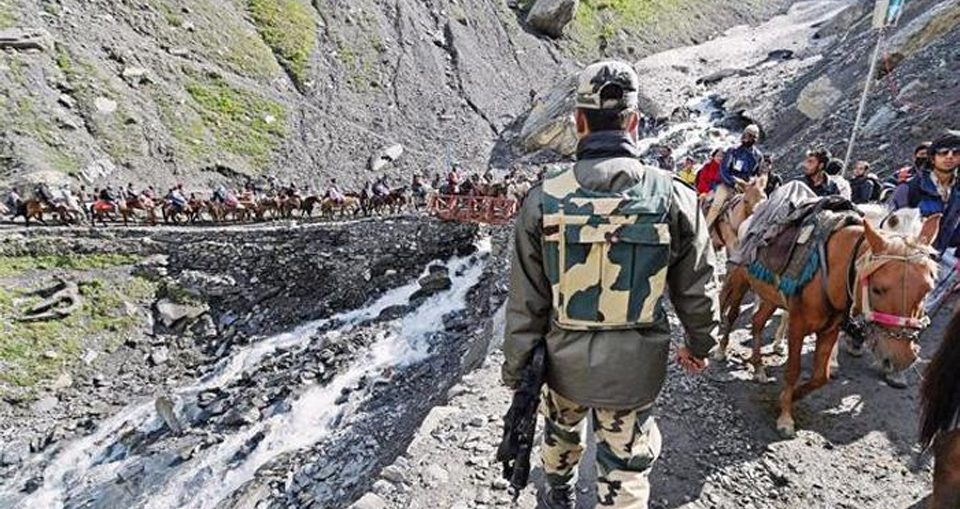 Jammu: Militants are planning to target 100 policemen and as many pilgrims participating in the Amarnath Yatra which will begin from Jammu tomorrow amid the “highest- ever multi-tier security setup”, according to intelligence reports.

“Intelligence input received from SSP Anantnag reveals that terrorists have been directed to eliminate 100 to 150 pilgrims and about 100 police officers and officials,” IGP Kashmir Zone Muneer Khan said in a letter which was sent to the Army, the CRPF, and range DIGs in the state.

A copy of the letter sent to the 15 Corps Headquarters, Srinagar, got leaked and went viral on social media.

The government has mobilised a heavy security blanket of over 35,000 to 40,000 troops including the police, the Army, the BSF and the CRPF.

The first batch of over 4,000 pilgrims will be flagged off by the deputy chief minister for twin base-camps of Pahalgam and Baltal in Anantnag and Ganderbal districts.

This year’s yatra will be eight days shorter against the last years’ of 48 days and conclude on Shravan Purnima (Raksha Bandhan) on August 7.

Situated in a narrow gorge at the farther end of Lidder Valley, Amarnath shrine stands at 3,888 metres, 46 km from Pahalgam and 14 km from Baltal.

“The attack may be in the form of stand-off fire on yatra convoy which they believe will result in flaring of communal tensions throughout the nation,” the IGP said in the letter which is being circulated in many groups on Whatsapp.

“The input is assessed to be a HUMINT (human intelligence) and it needs further corroboration,” the IGP said in the letter, adding that at this stage the possibility of a sensational attack by a terrorist outfit cannot be ruled out.

All the officers and officials deployed on the ground need to remain alert and maintain utmost vigil, he added.

However, Khan later played down the letter, saying there was no need to panic as it was part of information being shared with agencies to check its authenticity.

Jammu and Kashmir DGP S P Vaid said someone has spread it on social media to create panic.

Asked about the intelligence issue, Special Director General of CRPF, S N Shrivastava said, “I will not like to discuss the issue in public but you are aware about the situation in Kashmir. We have taken measures as per the these intelligence inputs and have made appropriate security arrangements.”

“This (yatra) is a big challenge to us. Elaborate security has been put in place for an incident-free yatra and to ensure safety and security of pilgrims and camps,” Shrivastava, who visited base camp along with IG Ashkoor Wani, told reporters.

CCTV cameras, jammers, RoPs, dog squads, bullet-proof bunkers, QRTs, satellite tracking and other security gadgets are being used to maintain vigil in view of increased threat perception due to in increased terror incidents and violence in Kashmir.

In Bagwati Nagar base camp in Jammu, over 3,000 pilgrims from different parts of the country have arrived for their onward journey to Lord Shiva’s shrine.

“For the security of camps and pilgrim in yatra cavalcades, security has been put in place. Most of the pilgrims will go in convoys including private cars,” he said.

Shrivastava said elaborate security arrangements have been put in place in all camps, railway stations, Amarnath foot track and the cave shrine.

“This Amarnath yatra will have the highest-ever security setup to ensure an incident-free yatra,” he said.

Apart from the existing CRPF in the state, the Centre has given over 250 additional companies of paramilitary forces to the state government. The BSF has deployed over 2,000 troops for the yatra. The Army has given 5 battalions and additional 54 companies of the police have also been mobilised.

Over 2.30 lakh pilgrims have registered for the yatra.

Linking up joint control rooms with the MET Department and the District Disaster Management Units has been done, officials said.

The deployment of Mountain Rescue Teams (MRTs) of the state police along with rescue teams of various security forces, deployment of well-equipped fire fighting teams at pre-determined points has also been done, they said.

At Baltal Base Hospital, Shrivastava interacted with doctors deputed from Safdarjang Hospital, Delhi, who are already treating the local residents and service providers.

Residential accommodation and mess facilities for about 250 medical personnel, including those arriving from different parts of the country, to provide medical assistance for the pilgrims have also been put in place.