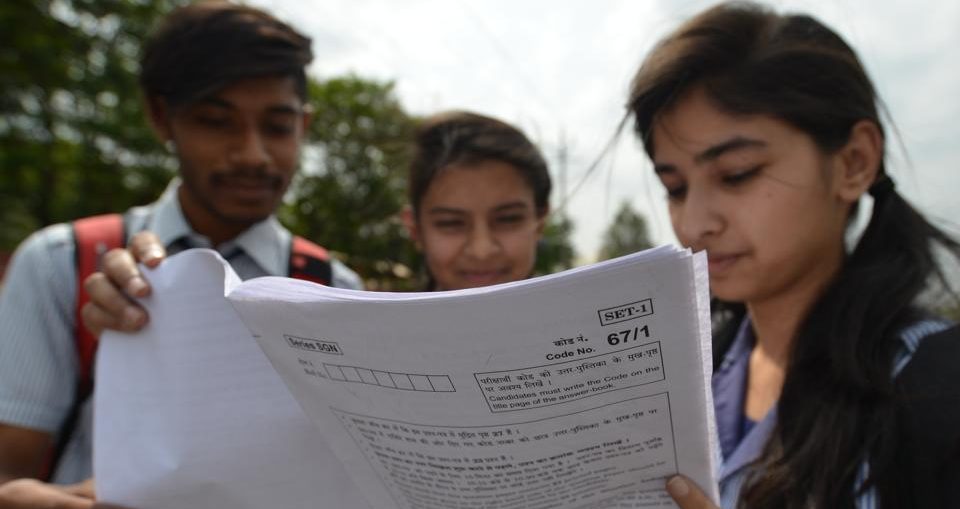 CBSE Class 12 accountancy paper was easy but had long and had tricky calculations, say students, amid reports that the questions were leaked and being circulated on social media.

Class 12 students of Carmel convent school checking their question paper after appearing in CBSE accountancy exam in Bhopal on Thursday.

Students, who appeared for the Central Board of Secondary Education (CBSE) Class 12 accountancy examination on Thursday, said the paper was easy but long and had tricky calculations amid reports that the questions were leaked and being circulated on social media.

Some of the students said they were not aware of reports about the paper leak that surfaced while the exam was being held, a charge denied by the education board.

A statement released by the board said a complaint will be filed and action taken.

In Jaipur, Sanya Agrawal of Maharani Gayatri Devi Girls’ School found the paper easy but said that the calculations were tricky.

“The paper was easy albeit a bit lengthy. The questions were mostly straightforward,” Priyank Gupta of Jayshree Periwal High School also said.

Himanshu Meena of Tilak Public School, however, found the paper tough and lengthy.

Vipin Sahani, a student of Bhopal’s Vikram Higher Secondary School, said managing time was necessary to complete the paper as it was a lengthy one.

“I didn’t find any difficulty in answering the questions,” he added.

Central School’s Ujma Siddiqui said the paper was “too easy” as compared to last year’s. “The questions were direct. However, it was a lengthy paper and I took an extra copy to answer the questions,” she said.

“It was altogether an easy paper. Though it was a little lengthy, I managed to complete it within the time,” Vaibhav Singh of Rani Lakshmi Bai (RLB) School said.

Singh said the paper was based on the sample papers, hence many students found it scoring. It was, he said, scoring as compared to the sample papers that were a little difficult to attempt.

Utsav Gupta, another student, also found it easy but said the pattern of the question paper was different this time. Gupta said part B was scoring but it didn’t touch many popular questions based on past adjustments, admission and retirement, and were instead on admission and death.

Gupta said the students had no idea about reports that the paper had been leaked.

“We are not aware of the reports on paper leak as we were too much engrossed in our studies. But we hope that CBSE does not cancel the paper as it would be a problem for those who studied sincerely,” he added.

Many teachers also found the accountancy paper of average difficulty level — neither very easy nor tough.

Deepika Joshi, another teacher of the subject at Allahabad’s Maharishi Patanjali Vidya Mandir, said the question paper was in accordance with the prescribed syllabus and pattern and students were well acquainted with it.

“Accountancy as a subject is interesting and performance of a student depends on the practice of accounts he or she had undertaken,” she added.

Commerce teacher Shyam Singh in Bhopal said students can score well in the exam as it was “overall a very easy and good question paper.”