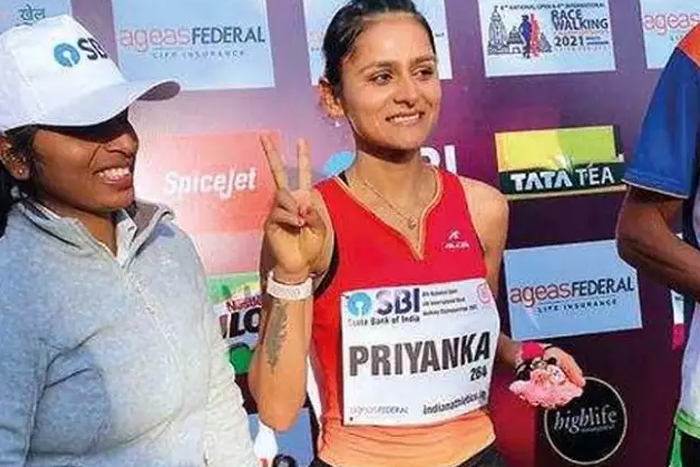 LUCKNOW: Ten years ago, this UP girl’s resolve for victory on tracks was for winning a bag that was at stake. On Saturday, it culminated into a national record and a ticket to Tokyo Olympics and for the World Athletics Championship in Oregon.

Priyanka Goswami, 25, shattered the national record in the 20-km walk at the 8th open national and 4th international race walking championship in Ranchi on Saturday with a timing of 1:28:45. She broke Bhawna Jat’s record of 1:29.54 set at the same event last year. This, however, was not a fluke. After joining the Railways in March 2018 through sports quota, Priyanka won two silver medals at national level in 2017-2018.

“I had made up my mind last year when I missed the event by a narrow margin of 36 seconds. It was then that I decided to make it to the international meet this year. Luckily, I got two qualifications (World Cup and Olympic),” Priyanka told from Ranchi.

“I am not able to believe this is true as I am emotionally overwhelmed. Now, I want to win gold for my country,” said Priyanka, who is currently being trained by two-time Olympian Gurmeet Singh.

“I was being groomed as a gymnast till Class 8… but after a two-year break I got inclined towards track and field events at the age of 12. During childhood, I failed many times but didn’t give up and neither my parents nor my principal Usha (at Seth BK Maheshwari Inter College, Meerut) lost hope. She’d allow me to attend classes once a week so I could train myself,” she recalled.

Priyanka did her graduation (arts) from Patiala. She scored 72% in high school and 58% in intermediate. “My journey to race walking began with my ‘zid’ (firm resolve) to win a bag at a district-level track and field event organised in Meerut (January, 2011). After I lost in various categories, my coach B K Vajpayee and Gaurav Tyagi forced me to participate in race walking, which I won (third position). Later, I won gold and silver while representing Meerut at junior national level walk racing. I never looked back since,” she added.

Her father, Madan Goswami, is a contractual bus conductor with UPSRTC and is currently under suspension. Originally hailing from Sagdi village of Muzaffarnagar, her family of five currently resides in Meerut. Her younger brother, Kapil Goswami (22), is a boxer but had to take up a private job in Delhi due to the poor financial condition of the family.