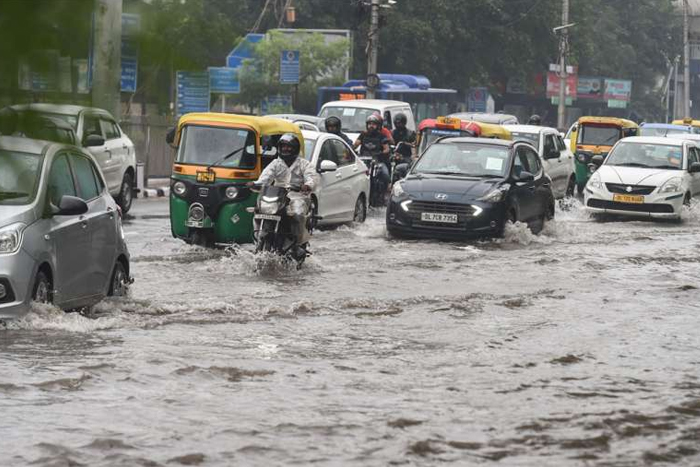 NEW DELHI: The capital received a spell of light rain on Tuesday, adding another 3.6mm to Safdarjung’s September’s rainfall total and taking the monthly figure to 408.3mm. The IMD meanwhile issued an ‘orange’ alert for Wednesday, forecasting moderate showers in parts of Delhi, which could also lead to waterlogging in places.

Wednesday’s shower is expected to see Delhi cross the all-time September rainfall record of 417.3mm, which was recorded all the way back in September of 1944.

The IMD, in its seven-day forecast on Tuesday, said rain was expected to continue across Delhi till Monday, with moderate spells expected on both Wednesday and Thursday. “The intensity will drop on Friday, with only a drizzle expected in some places, but light rain will return for Saturday and Sunday,” said a Met official, stating Delhi was on track to beat the record for September rainfall.

For this monsoon overall, Safdarjung has received 1,164.7mm of rainfall between June 1 and September 21, making it the third-highest monsoon ever recorded in the city and the highest since 1964 when Delhi received 1,190.9mm — another record that may break in the coming days.

Between 8:30 am and 8:30 pm on Tuesday, Safdarjung recorded 3.6mm of rainfall, while Lodhi Road, Ridge and Pitampura stations received 1mm, 17.6mm and 7mm of rainfall, respectively. No rain was recorded at other stations, IMD data showed.

The capital had a maximum temperature of 35.6 degrees Celsius on Tuesday, with the relative humidity oscillating between 55% and 89% in the last 24 hours.

The IMD forecasts the maximum temperature to drop to around 32 degrees on Wednesday, with moderate showers expected in most places. The IMD classifies rainfall as ‘moderate’ when it is between 15.6 and 64.4mm.