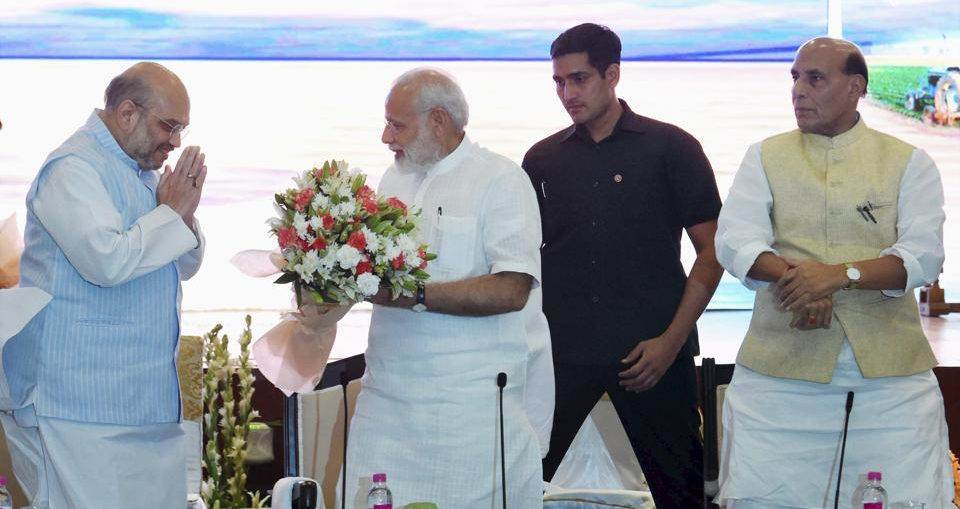 Prime Minister Narendra Modi being greeted by BJP President Amit Shah as home minister Rajnath Singh looks on at a meeting of National Democratic Alliance in New Delhi on Monday.

It was Prime Minister Narendra Modi’s day out on Monday.

He travelled to Delhi’s Akshardham temple in a Metro with his Australian counterpart, Malcolm Turnbull, attended a Champaran Satyagrah event in the evening and ended his day with a patting on his back from allies. Prime Minister Modi delivered a lecture to 33 NDA partners at its second such meeting after coming to power. Here are the five broad takeaways from the meeting.

1. Modi, the prime minister: His economic policies and welfare schemes came in for praise from allies. A resolution adopted at the meeting praised Modi for inclusive growth and uplift of the social and economic status of the poor. This was in consistence with the BJP’s effort to shed the pro-rich, pro-corporate tag that the Opposition has attached to it.

2. Modi, the leader: NDA allies expressed a “deep sense of appreciation” towards Modi for providing a “decisive and bold” leadership to NDA partners. They reposed faith in his leadership and asked people to resolve to vote another Government under Modi in 2019. Modi would be the NDA’s face in the next election and the endorsement showed the confidence that allies had in his ability to win election.

3. Show of unity: The meeting coincided with the opposition’s effort to cobble up an alliance against Modi in 2019. The size and the shape of any such alliance are still not known, and Modi wanted to take the fizz out of the exercise by showcasing the grand “NDA parivar”. It also came on a day several opposition parties approached the election commission with request to review the use of electronic voting machines (EVM) in election. The scale of Modi’s victory in the recent election has forced them to believe that EVMs were tampered.

4. Call for expansion: The NDA has presence in almost every state – from Kashmir to Tamil Nadu and Maharashtra to Arunachal Pradesh. Still, the resolution adopted at the meeting called for the need to expand the NDA by taking other parties on board. There has been speculation about Bihar chief minister Nitish Kumar’s overtures to the BJP. West Bengal chief minister Mamata Banerjee and Odisha Chief minister Naveen Patnaik had been part of the NDA in the past. While the BJP ruled out any truck with them in the near future, politics also leaves scope for interpretations. The exercise is also an effort to woo many smaller regional parties who can add muscles to the NDA.

5. Presidential election: India will elect a new president in July and the BJP is trying to keep its flock together to get its man elected to the top position. The issue did not come up for discussion in the meeting but the effort to reach out to allies was seen as an attempt to send a message to partners that the BJP values their position in the NDA.