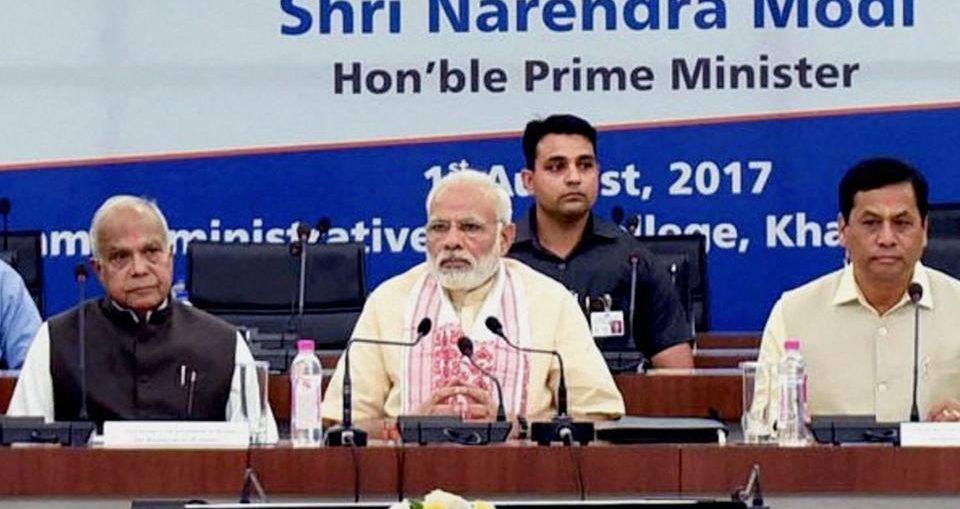 An ex-gratia assistance of Rs. 2 lakh to the next of kin of the deceased has been sanctioned under the Prime Minister’s National Relief Fund.

Prime Minister Narendra Modi chairing a high-level meeting to review the flood situation and the relief operations in the North-Eastern states, in Guwahati on Tuesday.

Prime Minister Narendra Modi on Tuesday reviewed flood situation in north-eastern states at a series of high-level meetings in Guwahati and announced assistance of over Rs. 2000 crore.

The Prime Minister announced the package for relief, rehabilitation, reconstruction and flood mitigation measures in the flood-affected north-eastern states.

Through the course of the day, the Prime Minister held separate, detailed review meetings on the situation in the states of Assam, Arunachal Pradesh, Manipur and Nagaland.

Over Rs. 1200 crore will be given by the Union Government for the infrastructure sector alone. The funds will be utilized for repair, maintenance, and strengthening of roads, highways, bridges, and other damaged infrastructure.

Around Rs. 400 crore will be provided for improving the water holding capacity of the Brahmaputra River, which will assist in flood control.

PM Modi’s ‘largesse’ for Gujarat floods outrages ‘ignored’ Assam
In the current financial year, the Union Government has approved Rs. 600 crore as central share of SDRF. Out of this, Rs. 345 crore has already been released, and the remaining will be released immediately, to assist the states in relief and rehabilitation work.

The Union Government will also provide Rs. 100 crore for carrying out a study to synergize efforts towards finding time-bound long term solutions to recurrent floods in the region.

The north-eastern region, with 8% of India’s land area, contains one-third of the country’s water resources. The Union Government will constitute a High Level Committee, with representation from Ministries of the Government of India and the States, for proper management of the region’s vast water resources.

An ex-gratia assistance of Rs. 2 lakh to the next of kin of the deceased, and Rs. 50,000 to each of those seriously injured due to the floods, has been sanctioned under the Prime Minister’s National Relief Fund (PMNRF).

Why India is failing to minimise monsoon flood destruction