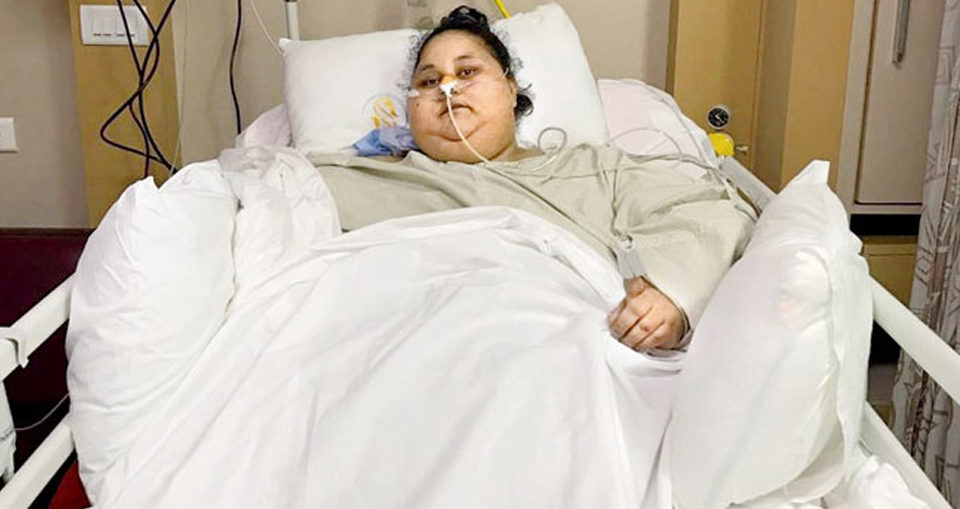 Egyptian national Eman Ahmed, who was being treated in Mumbai for obesity, would be shifted to a hospital in UAE’s Abu Dhabi soon. However, Ms Ahmed, who had arrived in Mumbai on a chartered cargo plane, would leave as a business class passenger on a regular flight.

“She came on a chartered cargo plane and goes back as a passenger on a flight in Business Class,” said Dr Aparna Bhaskar, section-chief of bariatric surgery at Mumbai’s Saifee Hospital, which was treating Ms Ahmed.

Ms Ahmed would be transferred to Abu Dhabi’s Burjeel Hospital, which is part of the VPS Healthcare group. VPS’ doctors had visited Ms Ahmed on Wednesday on the request of Ms Ahmed’s sister Shaimaa Selim.

“As the treatment here concludes, Eman is being shifted to Burjeel Hospital in UAE. Secondary physiotherapy will continue over there as it is closer to home for Eman and her family,” said a statement issued on Thursday by Dr Bhaskar.

The transfer request, however, comes amid allegations by Ms Selim that her sister was not receiving proper treatment in Mumbai. Ms Selim also alleged that the doctors had made false claims about Ms Ahmed’s weight loss of 262 kg, in a video message. She also hit out at bariatric surgeon Muffazal Lakdawala, who led the team of doctors responsible for treating Ms Ahmed.

Saifee Hospital and Dr Lakdawala have refuted all charges.

“The team of doctors at Saifee Hispital has done a fabulous job and her recovery has been unprecedented,” said Dr Bhaskar

“She is stable and all parameters are under control. She will continue to need neurological rehabilitation and physiotherapy,” she added.

The statement also mentioned that Dr Lakdawala was the one who introduced the family to experts from Burjeel Hospital. Dr Bhaskar also said that Ms Selim could be criticising the doctors to extend her sister’s stay at the hospital.

Eman Ahmed underwent bariatric surgery last month. Doctors said that her stomach size has been reduced by two-thirds so as to reduce food intake.