You are here
Home > DAILY BAWAL > China surprises India with its speed, moves out 200+ tanks from Pangong Tso 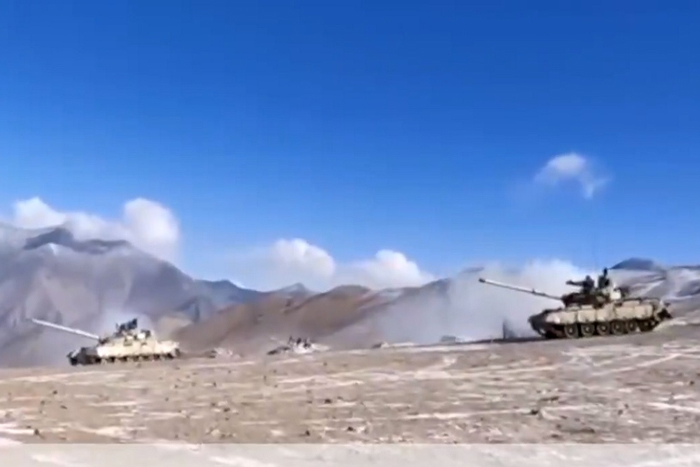 China surprises India with its speed, moves out 200+ tanks from Pangong Tso

The outcome was achieved after India stood firm on its position in east Ladakh and its aim of not conceding any territory.

Nine months since they first got into an eyeball-to-eyeball confrontation in east Ladakh, armoured units of the Indian Army and the People’s Liberation Army (PLA) started withdrawing from north and south banks of the frozen Pangong Tso on Wednesday morning, paving a way for peace and tranquillity to be restored all along the Line of Actual Control (LAC) with China.

By Thursday, PLA had withdrawn more 200 main battle tanks from the south banks of Pangong Tso and had positioned no less than 100 heavy vehicles to ferry its troops from fingers on north banks to Srijap sector, east of Finger 8. The speed of Chinese withdrawal has actually surprised the Indian army brass and national security planners.

Top government officials said on condition of anonymity that the disengagement at Pangong Tso began at 9 am on Wednesday after an agreement was reached between India and China after several rounds of back-channel negotiations handled by top ministers and officials, including external affairs minister S Jaishankar and National Security Adviser (NSA) Ajit Doval, with their counterparts in Beijing. The outcome was achieved after India stood firm on its position in east Ladakh and its aim of not conceding any territory.

“The speed of Chinese withdrawal since Wednesday also shows their capacity to deploy. It is a military art. The Indian side has also pulled back its armour but contingency plans are ready in case of a worst-case scenario,” said one of the officials, a senior member of the Narendra Modi government.

The officials added that as of Thursday evening, the disengagement in east Ladakh was proceeding to the satisfaction of both parties with the objective of restoring status quo ante all along the 1,597km Line of Actual Control in Ladakh. That India has been able to convince China, which boasts the largest standing army in the world and a rising superpower, to go back to its permanent base camp is no mean achievement, the officials pointed out.

According to the officials, both PLA and the Indian Army will withdraw their troops and positions from the agreed positions by Saturday. The agreement was that the disengagement would be completed in three days, they added.

According to the officials cited above, once the withdrawal of armour and artillery and troops has been completed from Pangong Tso, the two sides will initiate negotiations on disengagement from patrolling point 15 (Gogra) and 17 (Hot Springs) area, north of Pangong Tso.

Defence minister Rajnath Singh issued a statement on the “phased, coordinated and verifiable” pullback by the two armies in Rajya Sabha on Thursday. The ground positions were negotiated between the two corps commander and the framework through the diplomatic channel.

The government officials said that the fundamental tenet behind the disengagement is that both armies will eventually go back to their permanent bases as existed in April 2020. This means that while PLA withdraws to the Srijap sector, east of Finger 8 mountainous spur on the north bank, the Indian Army withdraws to its permanent base on finger three named after legendary 1962 war PVC winner Lt Colonel Dhan Singh Thapa. The same rule has been applied to the south bank with both armies returning to their permanent bases in Chushul (Indian Army) and Moldo (PLA).

“The Galwan model has been replicated on both the banks. After the Galwan June 15, 2020 clash, both sides have withdrawn to permanent bases with no patrolling from side till such time patrolling protocols have been framed. After the withdrawal is completed and confidence-building measures initiated by both armies, the two sides can decide on coordinated, joint or staggered patrolling,” said a senior official familiar with the details of the entire exercise.

India’s negotiating position received a boost after Indian Army troopers took over the heights of Rezang La Rechin La alignment on Kailash Range on August 29 and 30, 2020, despite valid fears of the move escalating into a full-blown India-China conflict. Just as the Chinese PLA tried to enforce the 1959 LAC line by aggression on Finger 4, the Indian side countered by achieving its military objective of holding up the Kailash Range line as per the Indian perception of LAC.