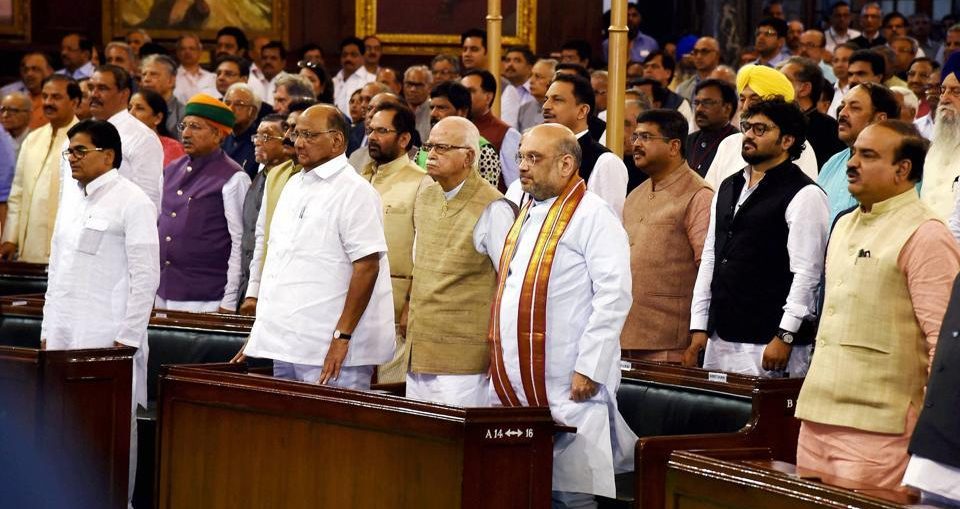 On the contrary, the Congress, Left parties, DMK, Trinamool Congress and some others boycotted the event to launch GST at Parliament.

BJP leaders LK Advani and Amit Shah with NCP chief Sharad Pawar stand for the national anthem at the special ceremony in the Central Hall of Parliament for the launch of GST in New Delhi.

The fragile unity of the opposition was shattered for the second time in a week when three parties broke ranks with the Congress and joined a government function to roll out the goods and services tax (GST).

The Nationalist Congress Party, Samajwadi Party and the Janata Dal (United) attended the glittering event that began on Friday night and stretched past midnight at Parliament’s central hall.

The Congress, Left parties, DMK, Trinamool Congress and some others boycotted the event, calling it a self-promotion exercise of the government.

President Pranab Mukherjee and Prime Minister Narendra Modi pressed a button to implement India’s biggest tax reform since Independence that will unify the country with a single tax, though with different slabs.