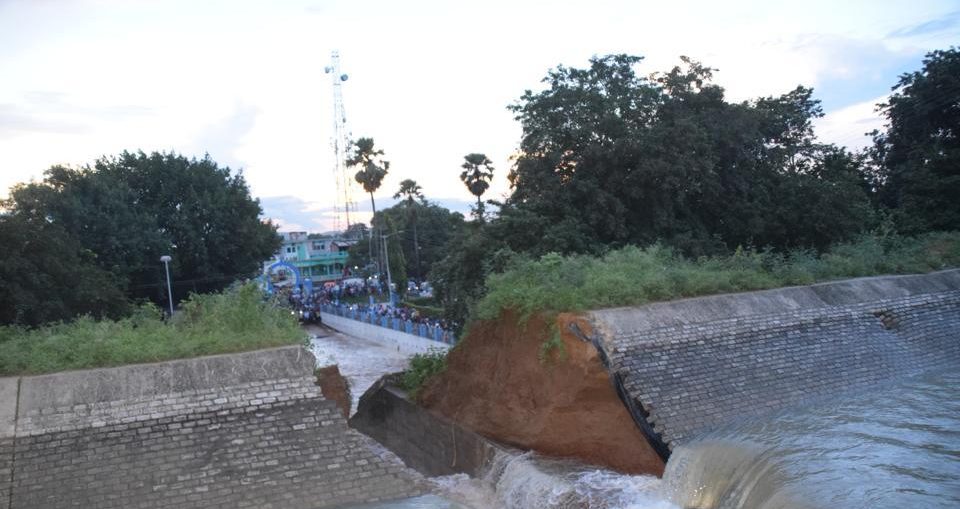 Officials said nearly 20 feet of the wall of the main canal of the Bateswar Ganga Pump Nahar Yojana breached during a trial and water gushed through, flooding a portion of the NTPC township nearby.

Nearly 20 feet of the wall of the main canal of the Bateswar Ganga Pump Nahar Yojana (BGPNY) breached during a trial on Tuesday.

A portion of an 11km irrigation canal caved in during trials on Tuesday in Bihar’s Bhagalpur district and gushing water inundated parts a nearby township, a day before the project’s inauguration by chief minister Nitish Kumar.

The wall breach in the Rs 389.31-crore lift irrigation project is a major embarrassment for the government as it took around 40 years to build.

Water from the Ganga is to be lifted through pumps and released into the canal to irrigate 22,658 hectares of farms in Bhagalpur and adjoining Godda district of Jharkhand.

The floodwater receded from most areas on Wednesday morning, but the inauguration of the Bateswar Ganga Pump Nahar Yojana (BGPNY) project had to be cancelled.

About half-a-km stretch of the road between Satkar Chowk and Murkatia Chowk was still submerged.

“The breach had been plugged and work is in progress to strengthen the wall,” said Arun Kumar, the chief civil engineer in the water resources department.

Water resources principal secretary Arun Kumar Singh blamed faulty construction of an underpass beneath the canal for the breach. The underpass was constructed by the NTPC.

He also held his department responsible, saying officials should have spotted the fault and fixed it before the trials being run for the past month.

The trials were carried out with low discharge of water in the canal, but it was turned to full capacity on Tuesday, he said.

Singh told reporters that all technical flaws would be removed in two months.

“Soon we will announce another date for inauguration,” he said.

“We are looking into the papers and design of the underpass. At present, I cannot speak more,” he said.

The Kahalgaon Congress legislator, Sadanand Singh, who was invited to share the stage with chief minister Kumar at the inaugural function, described the breach as “gross negligence” by officials.

He said a trial run with full discharge should have been carried out before to figure out problems.

The project was ready for inauguration this May but the event had to be cancelled because of technical difficulties, according to sources.

(An earlier version mentioned the cost of the project as Rs 800 crore. It has been corrected to Rs 389 crore.)