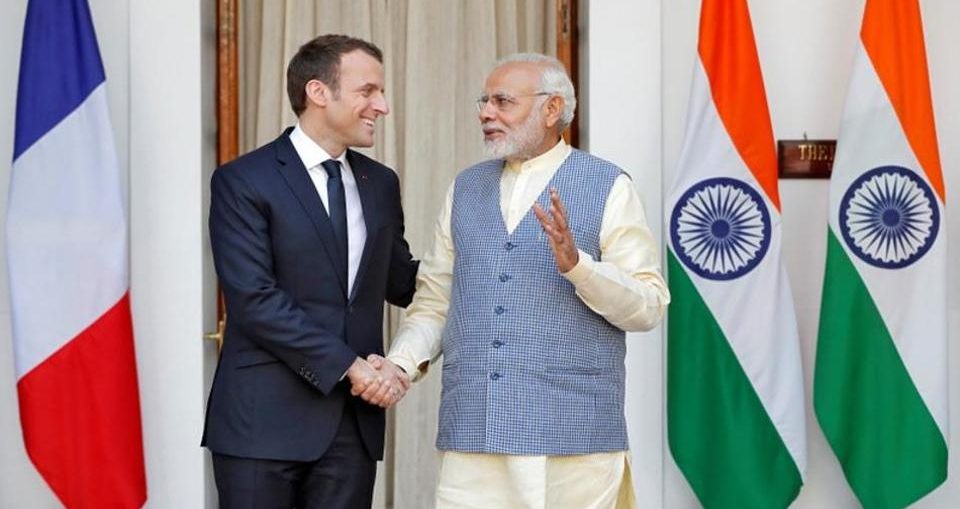 While the translation of the undefined concept of a “strategic partnership” into decision making at the governmental level in different areas will remain a fluid proposition, India and France have taken decisions during Macron’s visit that are manifestly strategic in intent and substance.

French President Emmanuel Macron shakes hands with Prime Minister Narendra Modi during a photo opportunity ahead of their meeting in New Delhi.

As far as outcomes go, French President Emmanuel Macron’s visit to India stands out for its strategic content, with understandings reached and agreements signed that have a long-term strategic significance. While France was the first country with which we declared a strategic partnership and began a strategic dialogue; strategic considerations have not studiously guided the growth of our ties. The meaning of “strategic partnership” can always be broadened to include economics and other areas, but it is in the domain of security that the concept expresses itself most credibly. Not being allies, there are, of course, limits on India and France forging a joint front against security threats with different geopolitical roots that each country faces. Our defence procurement process is unable to accommodate “strategic” decision making, which is why French participation in our defence sector has been uneven, with some striking successes such as the Scorpene and Rafale contracts; but notable setbacks in bagging contracts for refuelling aircrafts, helicopters and short range surface to air missiles even when tenders were won and joint projects approved.

While the translation of the undefined concept of a “strategic partnership” into decision making at the governmental level in different areas will remain a fluid proposition, India and France have taken decisions during Macron’s visit that are manifestly strategic in intent and substance. They are important in the context of widespread concerns about the uncertainties that have begun to mark the global system as a result of Donald Trump’s erratic foreign policy pronouncements and the unveiling of China’s hegemonic ambitions on land and sea. Both India and France intend to cooperate to address the consequences of America’s inward looking and protectionist policies, its willingness to repudiate international accords and weaken international institutions that it has itself sponsored, as well as the instabilities that China’s self-aggrandisement is generating in the Indo-Pacific region and the power imbalance it threatens to produce, with consequences also for Europe.

India has now firmly accepted France as a net security provider in the Indian Ocean (IO) and intends working with it to promote stability there. Emulating a similar India-US move, India and France have agreed on a “Joint Strategic Vision of India-France Cooperation in the Indian Ocean region”, flowing from which a Reciprocal Logistics Support Agreement has also been signed. The intention is to associate other strategic partners and establish trilateral dialogues, for which the first candidate could well be Australia. Besides building greater maritime domain awareness, the 2018 edition of the Varuna naval exercise will focus on submarine and anti-submarine warfare. The India-France Joint Vision for Space – another major strategic document emerging from the visit – envisages the pursuit of the study of a constellation of satellites for maritime surveillance. The third document of strategic importance signed during the visit is on the “exchange and reciprocal protection of classified or protected information”, which reflects the growing strategic trust between the two countries.

Stronger India-France strategic understandings have been reflected in the joint statement in various other ways. The robust paras on terrorism call for halting “cross-border movement” of identified terrorist organisations threatening India. All UN member states are called upon to implement UNSC Resolution 1267 designating terrorist entities, which points to China’s obstructionism on designating Masood Azhar as a terrorist. France has reaffirmed its strong and active support for India’s membership of the Nuclear Suppliers Group. With the Belt and Road Initiative in mind, France has joined the US, Japan and the EU in stressing that connectivity initiatives must be based on key principles of international norms, good governance, rule of law, openness, transparency, social and environmental standards, principles of financial responsibility, accountable debt financing practices, and must be pursued in a manner that respects sovereignty and territorial integrity. The reference to “sovereignty” is important in the light of our opposition to the CPEC.

The joint statement strongly endorses the nuclear deal with Iran. On Syria, where the positions of the two countries differ, that the two sides were able to craft a suitable paragraph is a drafting achievement. In the context of the Trump’s trade-related broadsides and his latest decision to impose tariffs on steel and aluminium imports, India and France have reaffirmed the centrality of the rules-based multilateral trading system and its importance for open and inclusive global trade. The launching of the International Solar Alliance jointly by Macron and Modi furthers the objectives of the Paris Agreement on Climate Change and forges one more strategic bond between India and France.