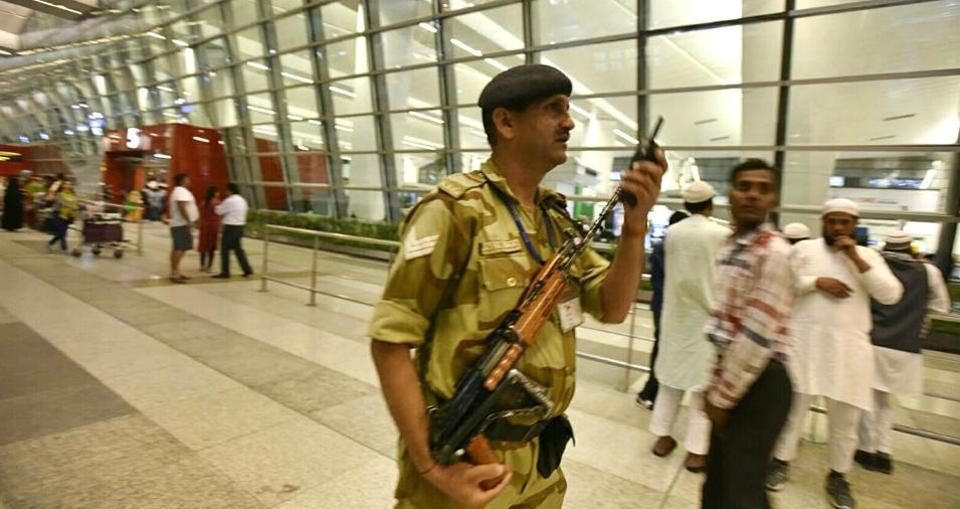 A team of the Central Industrial Security Force, the Delhi Police and the aviation security was rushed to the spot.

A securityman at the Delhi airport talks on walkie-talkie even as passengers look on. The airport saw a brief pause in operations on Sunday after a pilot raised an alarm about a drone-like object.

Flight operations at Delhi airport were halted twice for around two hours on Sunday after pilots of two airlines spotted a drone-like object in the area even as security agencies went into a tizzy.

The pilot of an international airline first noticed a flying object during landing which led to the closure of runways from 11. 20 am to 12.20 pm. In the evening, a pilot of Air Asia spotted a similar object and informed the ground staff, following which flight operations were halted for 40 minutes.

“An Air Asia flight no I5-799 was halted for around forty minutes after the pilots spotted the object near Terminal 3 of the high-security Indira Gandhi International (IGI) Airport while landing at 7.09pm and reported the matter to the authorities,” said an official of the CISF, which looks after the airport security across the country.

“As precautionary measures, all three runways in the airport were closed until 7.55pm. Flight operations resumed only after getting clearance from Delhi Police,” the official added.

Police sources said after receiving the complaint, teams of the airport and south west district police inspected different areas in Dwarka, where the flying object was reportedly sighted.

Till late Sunday night, police could not identify who were flying it.

Flying of drones, an unmanned aircraft, is prohibited in areas across the airport.

Deputy commissioner of police at the airport Sanjay Bhatia told Hindustan Times, “We have received a complaint from the airport. We are looking into the case and will take legal action.”

An official from AirAsia India said, “The pilots spotted an unidentified object flying close to the aircraft while landing. They reported the incident to air traffic controller, director flight operations and head of corporate and flight safety.”

The airline has also filed a report with the DGCA, he added.

A team of the Central Industrial Security Force (CISF), the Delhi Police and the aviation security rushed to the spot as the airport authority is trying to find the source of this unidentified drone.

The IGI Airport is the busiest in the country and handles around 1,200 flight movements every day. During peak time, the airport handles up to 70 flights per hour.

Earlier on August 2, a suspected object was recovered at the cargo hold area of the airport, raising security alarm.

After 4 months of coma, amnesia, woman regains memory and says husband tried to kill her