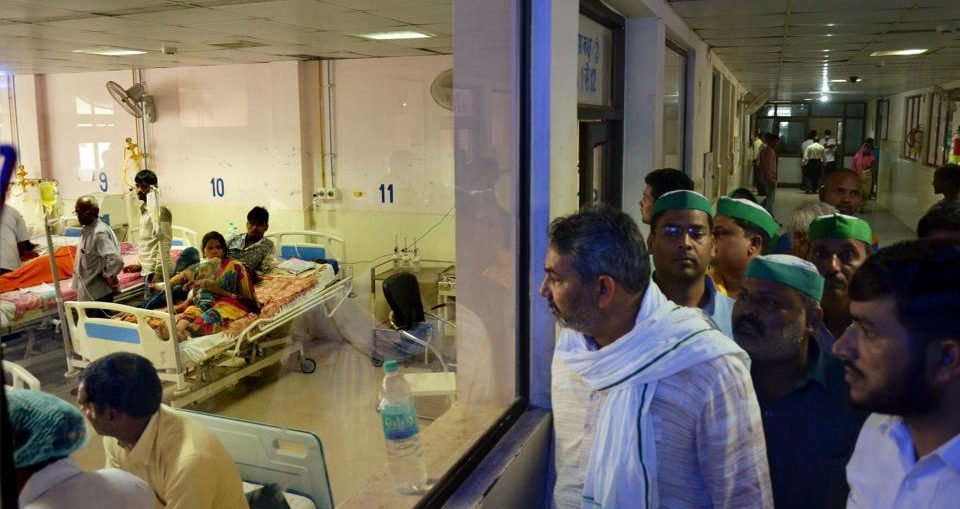 A report released by the IMA team blamed the institute administration for the crisis, stating that the service provider had held back on oxygen supply due to non-payment of dues.

Children being treated at the encephalitis ward of the BRD medical college hospital in Gorakhpur.

A fact-finding team of the Indian Medical Association (IMA) has confirmed that the BRD Medical College Hospital witnessed a disruption in oxygen supply on the night of August 10, an incident that allegedly led to the death of several children.

A report released by the IMA team blamed the institute administration for the crisis, stating that the supplier – Pushpa Sales – had held back on oxygen supply due to non-payment of dues. It charged professor Rajiv Mishra, the then principal of the medical college, and Dr Kafeel Khan, in-charge of the encephalitis ward, with negligence.

A three-member IMA team, comprising Dr KP Kushwaha, Dr Ashok Agarwal and Dr BB Gupta, had visited the medical college on Thursday. The report, which was released later that evening, also accused the institute administration of overpopulating the wards and not ensuring proper sanitation among patients.

The report cited Gorakhpur as being just one among as many as 17 districts in the region that don’t have proper arrangements in place for treating encephalitis patients. It also drew the government’s attention to a dire shortage of pediatricians and resources at district hospitals and community health centres in these areas.

The IMA team alleged that lack of facilities at government hospitals was driving a large number of patients to private hospitals for better treatment. The state government should bear the expenses of the poor patients admitted there, it added.

Shah, Yogi in Amethi today as BJP rolls out heavy artillery against Congress